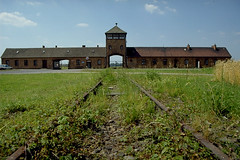 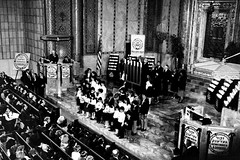 Though external to the Jewish tradition, the phenomenon of anti-Semitism is central to the Jewish experience. In the early Diaspora, Jews’ unusual monotheism, iconoclastic approach, and communal coherence often evoked social tensions with neighbors in the ancient world. With the rise of Christianity—first an offshoot of Judaism, then a more formal competitor in the Roman world—anti-Jewish hostility was given strength through some interpretations of New Testament writings, including the Gospels of John and Matthew. (In John 19:15, for instance, the chief priests and the Jews cry out for Christ’s crucifixion and in Matthew 27:25 the crowd calls for Christ’s death saying, “His blood be on us and our children!”) Such writings, although unique to their own context, authorship, and socio-political perspective, would lay the foundation for centuries of negative stereotyping. The image of the Jew as a traitorous sinner and killer of Christ was later embellished with ethnocentric and racist accusations of Jewish economic exploitation, well-poisoning, child-killing, sexual depredation, conspiring for world domination, and other baseless claims.

The equating of Jews with evil practices continued through the European Enlightenment and the post-Emancipation period. In response to the civil equality granted the Jews, anti-Jewish reactionaries questioned the wisdom of opening the doors of society to such a non-assimilated community; they accused the Jews of disloyalty and of creating a state within the state. How to incorporate the Jews into the modern state, or whether to do so at all, became the “Jewish question” of nineteenth-century European politics. Toward the end of the century, a new political movement gave an extreme answer: the Jews must be eliminated from society. This movement was termed anti-Semitism, influenced in its most extreme form by pseudoscientific theories of race and eugenics which labeled Jews the inferior “Semitic” race. The movement reached a climax at the end of the nineteenth century with the Dreyfus Affair in France, an incident in which a French Jewish military captain was framed for espionage, and the publication of The Protocols of the Elders of Zion, a Russian forgery circulated as the minutes of a meeting in which Jews conspired to take over the world. Though anti-Semitic fervor declined for a time at the beginning of the twentieth century, anti-Semitism would soon return with greater force.

The defeat of Germany in World War I and resulting submission at Versailles created a degraded German economy and struggling society. Anti-Semites in Germany soon began to lay the weight of these plights at the feet of the German Jewish community. These accusations quickly built the foundations of the anti-Semitic National Socialist German Workers’ Party, abbreviated in German to “Nazi.” Led by Adolf Hitler and quickly rising to assert control over German politics and law, the Nazis’ anti-Semitic bigotry and ultra-conservative fascism raised the stakes of anti-Semitism higher than ever before, producing the most horrifying results. Throughout their history, Jews had suffered periodic persecutions, expulsions, and even massacres, but nothing could prepare them for the Nazi onslaught. During the 1930s the new German regime enacted a series of debilitating anti-Jewish laws, essentially revoking the European emancipation of the previous century. On November 9-10, 1938, hundreds of synagogues and Jewish stores were destroyed by German mobs in a rampage that came to be called Kristallnacht, the “Night of Broken Glass.” Following their invasion of Poland, the Nazis began the systematic destruction of European Jewry, first through imprisonment in ghettos that led to widespread starvation and disease, then through mass shootings and gassings, and finally through the construction of death camps throughout German territory in Europe. In the end, over six million Jews were killed, roughly two-thirds of the Jewish population of Europe or one out of every three Jews in the world. In Poland and Lithuania, where centuries of Jewish life and culture came to an abrupt end, 90 percent of the Jewish community was killed. The enormity of the genocide is expressed in English as the Holocaust (from a Greek word meaning “all-burned”) and in Hebrew as the Shoah (“catastrophe”).

While many economic, social, and political factors influenced the rise of the Nazi party and the widespread genocide of the Holocaust, European anti-Semitism played a key role. Jews today continue to live with anti-Semitism and the Holocaust, which has reached a central place in Jewish history and belief. To the biblical commandment “Thou shalt have no other God before you” (Exodus 20:2), many Jews have added another: “Never forget.” Jewish scholars have reevaluated the Jewish relationship to God, Torah, and Israel in light of the modern experience. Historians of Judaism and European history have written countless texts and arguments interpreting the Holocaust. Jewish community leaders and politicians are vigilant in fighting contemporary manifestations of anti-Semitism, so that such a cataclysm will never happen again. Even non-Jewish social activists apply the lessons of the Holocaust to other cases of inhumanity in the world today. And countless Jewish homes and synagogues balance remembrance of the Holocaust with the joy and celebration of building a renewed spiritual life around the rich customs and traditions of the Jewish community.