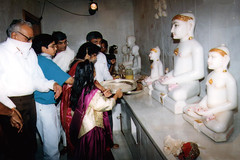 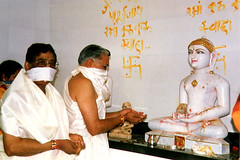 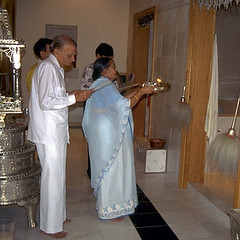 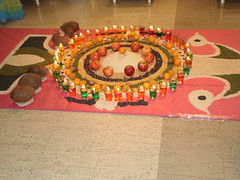 In the spring of 1993, nine marble images of the Jain Tirthankaras arrived in packing crates at O’Hare International Airport in Chicago. They had been made in Jaipur, India, and were to be placed in the new temple built by the Jain Society of Metropolitan Chicago in the western suburb of Bartlett.

The Jains of Chicago had been meeting for twenty years, celebrating their annual festivals in various school auditoriums and rented halls in the Chicago area. Finally they were able to purchase fifteen acres of land in Bartlett to build a temple. The puja to the Earth, or groundbreaking, took place in November of 1990. The Center building was inaugurated in May of 1992—a fine brick and marble Jain Center with a temple, an auditorium, kitchen facilities, and meeting rooms. But not until June of 1993 were the new images installed and consecrated. In July of 1995, the entire group of twenty-four Tirthankaras were established in small chambers set around the central sanctum—a pattern typical of Jain temples in India.

Even though there is this interior aspect to the presence of the holy ones within ourselves, once these images have undergone the pratishtha rites, they must receive daily puja—worship, honor, and care. Arrangements must be made with a pujari or the laity to perform such rites. It is understood that, before the rites, these statues are just stone. One can honor them on weekends and special days, and then put them away again. But after the pratishtha rites, according to Jains, there are “divine vibrations” present, the images have “life in them.”

The installation rites begin with the Namaskara Mantra in which the five groups of holy ones are praised. The puja which follows uses water, sandalwood, flowers, food, incense, oil lamps, and fruit to honor the particular holy ones represented by the statues being consecrated. The rites include bathing the images, reciting mantras and prayers, and touching the nine places on the bodies of the images—feet, knees, arms, shoulders, navel, heart, throat, forehead, and top of the head. Some of the lengthy rites are done by lay persons, usually a householder couple who have bid the highest amount for the privilege. Interestingly, “bidding” for various ritual roles in such rites, as well as in rites held at the time of festivals, is a long-established form of fundraising in the Jain tradition.

The three primary images established in Chicago are Mahavira, the 24th and last Tirthankara seated in the center of the inner sanctum; Adinath, the first Tirthankara, on the left; and Parshvanath, the 23rd Tirthankara, on the right. They look virtually alike, as do all the images of these spiritual pioneers, but they may be recognized by their associated symbolic animals—the lion for Mahavira, the bull for Adinath, and the serpent hoods fanned above the head of Parshvanath. Similarly, the images of the remaining Tirthankaras, installed in Chicago two years later, can be differentiated only by an accompanying symbol, usually an animal or an element of nature.

When Jains come to the temple to worship, they sit quietly in meditation before these images, perhaps repeating prayers on a rosary. The temple provides a peaceful atmosphere for the practice of meditation in the symbolic presence of the illumined ones. Jains also perform various acts of worship or puja—offering water, fruit, flowers, and the lamp-offering called arati. Together, they may recite mantras or sing one of the well-known bhavnas, or devotional songs. They may perform special rites—ritually bathing the images by placing a small replica form on a silver stand and pouring water over it, or entering into the sanctum to touch the Jinas with sandal paste at the nine body points. Any decoration of the images, however, is done only by the Shvetambar Jains. The Digambars, whose own ascetics wear no clothing at all, prefer their Tirthankaras without the adornment of flowers and sandalwood paste.

One might ask, however, “Does Mahavira, who dwells in full enlightenment, receive these offerings?” “We offer these things with devotion,” says a young woman in her twenties, “But the Lord does not take them or need them. It is, for us, a spiritual purification and a step toward detachment.”