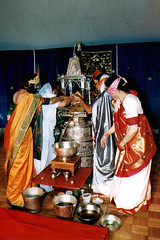 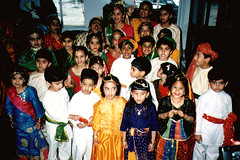 On many occasions, Jains remember and celebrate what they call the five “auspicious moments” in the life of each Tirthankara: conception, birth, renunciation, enlightenment, and final liberation at death. Two of the great holidays of the Jain festival year are especially dedicated to the life and achievement of the Tirthankara Mahavira. Mahavira Jayanti celebrates his birth, and Divali celebrates his final liberation or nirvana.

On April 24, 1994, Jains celebrated the 2,592nd birthday of Mahavira. In India this day, Mahavira Jayanti, is a national holiday. In America, it is far from a national holiday, but is a very important festival day in the life of the Jain community. In Tulsa, Oklahoma, the children of the Tulsa Jain Sangha help to perform the Snatra Puja, bathing the image of Mahavira. In San Francisco children perform a dance-drama on the fourteen dreams Lord Mahavira’s mother had just before Mahavira was born. In North Carolina the children put on a cultural program including recitals and dances. In Florida Jains from Miami, Fort Myers, and Jacksonville all celebrate together at the Ramblewood Middle School in Coral Spring. The day’s speaker stresses the importance of Mahavira’s teachings in a world that sees so much war and conflict.

Shvetambar Jains also celebrate Mahavira’s birth during the annual eight-day festival of Paryushan, which takes place in the month of August or September. On this occasion, silver images of the fourteen dreams of Mahavira’s mother are honored; and among Murtipujak Shvetambars, the Kalpa Sutra, which contains the scriptural account of Mahavira’s birth-story, is read. Nonetheless, Mahavira Jayanti, in the month of March or April each year, remains the official birthday.

The nirvana of Mahavira is celebrated with a festival called Divali, a fall festival of lights. In the Hindu tradition, this is a festival associated with Lakshmi, the Goddess of Wealth and Prosperity. A multitude of lights are lit in homes and businesses to make them fine residences for the visit of Lakshmi. For Jains, the lights of Divali are also kindled, but their significance is to commemorate the illumination of the Tirthankara Mahavira. In entering into the state of nirvana at the time of his death, he attained perfect freedom, illumined by the clear light of the soul. This is the “wealth” that Jains honor on the festival of Divali. While Paryushan is more somberly spiritual, Divali is a truly festive Jain holiday. Jains will gather at night to light the lamps, chant mantras, and sing together.

In an article in the Jain Digest, an American Jain wrote to encourage the Jain practice of a form of meditation called Samayik, as an appropriate part of the observance of Mahavira’s nirvana. Samayik meditation is a forty-eight minute period of quieting the body and mind and attaining equanimity. It is an old Jain practice and is considered to be the inroad to the soul. He writes, “Our Samayik is the practice of equanimity. We may celebrate the Nirvana day of the Lord with the usual lights, etc. Let us, however, think of the dawning of the light within ourselves. For this purpose, let us decide on the eve of that occasion to regularly practice true Samayik and gain peace and tranquillity. Thereby we can show to others that Jainism is not simply a bundle of mechanical rituals. That would be the most fitting tribute to Lord Mahavir.”

The White House
Office of the Press Secretary
October 15, 2009

On behalf of the American people, I want to extend my warmest wishes for Diwali to all who celebrate this auspicious holiday, here in America and around the world.

Diwali is the festival of lights, a time when members of some of the world’s great faiths celebrate the triumph of good over evil. It’s significance is laid out in the Sanskrit verse: “Lead us from falsehood to truth, from death to life, from death to immortality…