V.R. Gandhi at the World’s Parliament of Religions 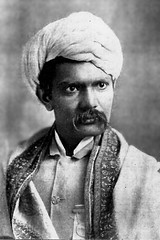 V.R. Gandhi at the World’s Parliament of Religions

The entry hall of the new Jain Center of Metropolitan Chicago contains a bronze image and plaque honoring Virchand Raghavji Gandhi, the first Jain to come to the United States. He came as a Jain representative to the World’s Parliament of Religions in 1893. Gandhi would have been astonished to see, in the centennial year of that Parliament, June of 1993, a new million-dollar Jain temple dedicated in Bartlett, Illinois, a western suburb of Chicago. In the very week of the Parliament centennial observances in September of 1993, the memorial honoring V.R. Gandhi was installed and dedicated.

V.R. Gandhi came to the Parliament at the request of His Holiness Acharya Shri Vijay Anandsuri, better known as Muni Shri Atmaramji. It was Atmaramji, a Jain monk and leading reformer, who had initially received the invitation to attend the Parliament. Since munis in the Jain tradition are not to travel across the oceans, there was no question of the attendance of one of the spiritual leaders of the tradition. He therefore selected Virchand R. Gandhi, a lawyer, born in 1864 in Mahuva on the Saurashtra peninsula in western Gujarat. Gandhi had studied at Elphinstone College in Bombay University, graduating in 1884. He was secretary of the Jain Association of India and represented the Jain community in various contexts in India. He was an eloquent representative of the Jain community at the Parliament, returning home only in 1895 after a lecturing tour in the United States and a stop in England. He returned to the U.S. to lecture in 1896 and died, in India, in 1901 at the young age of thirty-seven.