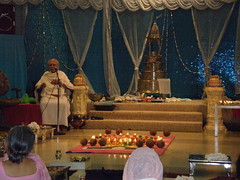 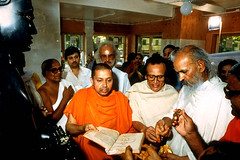 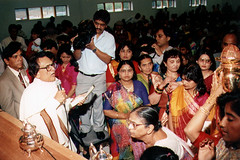 While it has a strong and growing lay leadership, the Jain community in North America has had to function with little of the lay-monastic interaction that characterizes its life in India. In the 1970s, however, two Jain religious leaders came to the United States and have, in different ways, made a contribution to the leadership of the Jain tradition here. Both were steeped in the Jain monastic tradition and had been studying, teaching, and traveling on foot amongst the Jains of India for many years before deciding to come to the West. When he came to America in 1971, Muni Chitrabhanu ceased his monastic life, married, and became a teacher—albeit a teacher with the background and training of a monk. Acharya Sushil Kumar remained a monk, as he had been for thirty-three years, but broke the strong prohibition on travel. He lectured throughout the West, participated in Jain and interfaith conferences, established a Jain ashram in the hills of New Jersey, and was an active leader of Jain education and institution building until his death in 1994. These two have been followed in recent years by other monks and nuns.

Both Gurudev Chitrabhanu and Acharya Sushil Kumar had to break the strictures of Jain monasticism in order to teach the message of Jainism in the West. When the centennial of the 1893 Parliament took place in Chicago in September of 1993, both were present, not as delegates from abroad, but as leaders of a growing American Jain community. Both had established American Jain institutions, Chitrabhanu the Jain Meditation International Center in New York, and Sushil Kumar the Siddhachalam Ashram in New Jersey. During the Parliament itself, they led an interfaith delegation from the Palmer House in downtown Chicago to the new brick and marble Jain Temple in the western suburb of Bartlett to visit the temple and honor V.R. Gandhi, who had come to America as a stranger one hundred years before.