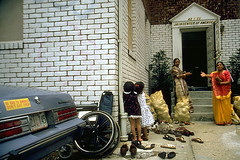 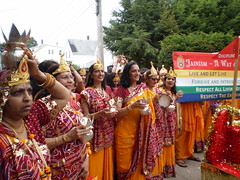 Gradually, the Jain community in America has established Jain centers and temples. The first Jain center opened in 1966 in New York City with twenty families. At the outset, this community held its festival celebrations at Columbia University. The center now serves over 400 members. Since then, over sixty Jain centers and organizations have been established in North America. As of 1995, twelve cities in the U.S. have Jain temples and eleven others have Jain temples within the context of Hindu temples. In the 1970s Jain centers or societies were founded in Chicago, Cleveland, Northern California, Rochester, NY, Cincinnati/Dayton, Southern California, and North Carolina. In the 1980s Jain centers, temples, or societies began in Washington, D.C., Connecticut, Atlanta, Pittsburgh, Buffalo, Phoenix, Syracuse, St. Louis, Louisiana, New Jersey, Greenville, SC, Minnesota, West Texas, and Memphis.

In the early 1980s an umbrella organization was created to bring Jain centers together and to provide leadership for the American Jain community as a whole. It is called JAINA, the Federation of Jain Associations in North America. It convened for the first time and adopted its structure and constitution in Los Angeles in 1981. Its purpose is to unite the Jain community across the lines of regional custom, language, and sectarian beliefs and to provide the necessary environment, resources, and motivation to hand down the tradition to American-born Jain children.

Although JAINA increases communication among Jain communities, each group develops independently, and each Jain center has a distinctive character and history. For example, while the festivals and puja are especially important to the Southern California Jain community, the Jain Center of North Carolina does not stress ritual and has been involved, instead, in creating an educational program for adults so that they can educate children. One member of the community, Mr. Pravin Shah, became so concerned about the lack of educational material that he took time off from his work to travel to India in search of appropriate educational material for use in the U.S. He made tapes of the discourses of religious leaders and compiled an English-language religious study book for children with Jain stories, scriptures, philosophy, mantras, and songs. The Jain Center of Boston, established in 1973, has also pioneered in the development of educational materials. In 1981, it began publishing the Jain Study Circular (now published in Flushing, NY), which is filled with articles by Jains about the Jain tradition—doctrines, festivals, and practices.