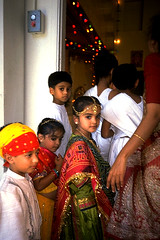 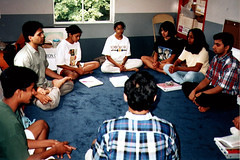 A college-aged Jain has said this: “Like any immigrant community, we Jain Americans are fighting to sustain our identity, walking carefully along the rim of the mythical cauldron of the melting pot. We won’t fall in, and our elders are taking great pains (or joys, as the case may be) to ensure that the next generation, my generation, doesn’t either.”

In India, Jain young people most often live in religiously saturated environments, allowing them to acquire through daily life knowledge of their religion from the monks, temples, texts, and people that surround them. This general, cultural education, along with the assurance of readily available resources to which young people can always turn with new questions, together provide an adequate grounding in the Jain religion. The environment for American Jains, by comparison, is religiously dilute. Here Jains are spread too thinly to provide young people with the Jain environment necessary to sustain such “education by osmosis.” In addition, the assurance of accessible resources is replaced by the formidable barriers of language and distance. Even when leading Jain teachers come from India, the language and context out of which they speak is distant from the experience of second-generation American Jains.

Jain communities nationwide have responded to this dilemma with deliberate, structured, pathshala programs. The word pathshala, which literally means “learning place,” is traditionally used to describe the religious classes, conducted by local gurus, that make up the only formal Jain education in India. These classes primarily consist of sutra and mantra memorization and provide a supplement to the osmosis approach. The American pathshala, however, is an exciting reincarnation of this age-old institution.

Parents often start with a handful of children and a prayer book in one family’s basement. Because the programs are largely unprecedented, they are blessed with an experimental and evolutionary nature, one that helps them to adapt to the unique challenges they face. What do the teachers, who are almost always parents, feel is important to pass on? What role do culture and language play in religious education? How does the pathshala balance elements such as ritual and philosophy? How can it help children to apply a Jain perspective to daily life?

Pathshala programs have grown quickly, developing multi-level curricula and compiling extensive educational materials. This has been a challenge given the lack of English books on Jainism written for children, and the fact that most Jain youth in America have a limited knowledge of Indian languages. Lying at the intersection of old and new, the development of pathshalas illustrates the rapidly evolving face of Jainism. Students in North Carolina, for example, receive points, which can later be converted to cash (at a formidable exchange rate!) for every memorized prayer or song. “It may not sound like aparigraha, or non-attachment,” says one student, reflecting on the experience from the lofty standpoint of college, “But our teacher, Pravin Shah, knows it is an incentive. It sparks religious enthusiasm in my sneaker-buying generation of American Jains. And we learned a lot.”

The pathshalas stress many kinds and ways of learning. Students in the Washington, D.C., area test their knowledge with a version of “Jain Jeopardy.” Students in Connecticut engage in various types of community service, including serving a vegetarian breakfast at a Bridgeport soup kitchen. Youth at other centers perform plays depicting traditional Jain stories and folktales. Some communities also make Gujarati, the predominant language of nearly all American Jains, a major component of their pathshala curriculum; others stick to fundamental Jain teachings and accept English as the primary carrier of their faith in the American context.

While each pathshala is unique, most teach the fundamental Jain principles and several basic Jain prayers in the original Prakrit language. More varied is the way they approach the challenge of how youth can apply Jain principles in their daily lives. The importance of the vegetarian diet and its relationship to the American lifestyle is fundamental. (How does one explain why they are vegetarian to their friends? Which fast food places serve vegetarian food?). Some classes discuss ethical career choices and issues of animal rights. Others reexamine traditional Jain rituals and lifestyles in light of the new context.

In addition to the pathshala movement, young Jains have also organized themselves in their various communities. In 1992, at the 7th annual JAINA convention in Pittsburgh, an umbrella organization was founded—Young Jains of America. The very next year, YJA held a by-youth for-youth convention in Chicago that was attended by the teacher Chitrabhanu and rigorously focused on religious education. The combination of parents concerned for the education of the next generation and young people taking the initiative to organize their own movement bodes well for the future of Jainism in America.