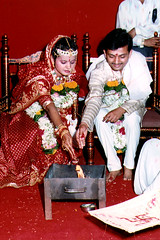 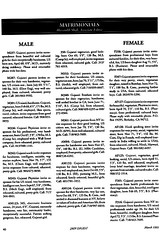 The selection of marriage partners constitutes a central issue not only for Jains but for most new immigrant communities in the United States. It is an especially critical issue when the community is as small as the Jain community in the U.S. In a nutshell, in America young people live in a culture where only “love marriages” are seen as acceptable and in families where, in most cases, only “arranged marriages” are considered acceptable.

At a national convention of JAINA (The Federation of Jain Associations in North America), a twenty-three year old woman explained her own experience: “When I was nineteen, I made an agreement with my parents that if I met someone I wanted to marry, they would be open-minded about the possibility, but if they first found someone whom they thought was suitable, I would be open-minded.” A few years later, her parents found a young man for her whom she dated for five months and then married. Both she and her husband felt that family involvement in their marriage had been very important.

Compromise is rarely so easy, however. At a JAINA convention held at Stanford University in 1991, the young people put on a skit called “A Play on Names,” which criticized some of the superficial assumptions the youth felt predominated among their parents. The drama told the story of a young man with two girlfriends. One wore the traditional Indian pants-dress combination called a shalwar kameez, professed skill in Gujarati cooking and Indian dance, and used her Indian name; the other wore blue jeans, took jazz lessons, and had anglicized her name. His parents much preferred the first girl and tried to keep him from seeing the second. At the end of the play, however, the audience learns that the seemingly “traditional” girlfriend leads a wild life out of view of the older generation and has no deep feeling for her parents’ values and culture, while the other, who seemed so far from Indian tradition externally, actually respected at a deeper level her parents’ viewpoints and the traditions of Jain thought and ethics.

Both young people and parents, however, express the need for a forum of communication. The American Jain community has recently responded to the problem by establishing a Marriage Information Service operating through the publication Jain Digest. In a recent count there were some ninety registered candidates in the Service—fifty women and forty men between the ages of twenty-one and forty-seven. The Service transmits the initial correspondence between interested parties:

According to the JAINA sponsors, “Marriage and family are and will remain the institutional foundations of our culture and religion in any society.” How to promote the growth of Jain families in a small and far-flung American Jain community is the question.