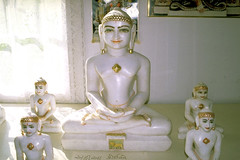 According to tradition, Mahavira was born in the year 599 BCE as a prince named Vardhamana, “Increaser of Prosperity,” in the town of Vaishali in north India. Legend tells how his mother had a series of dreams or visions that presaged the birth of a spiritual leader. She saw, for example, a white elephant, the Goddess Lakshmi, the full moon, the rising sun, a lotus pond, and a blazing fire. Though the child grew up familiar with pleasure and luxury, he left it all behind at age thirty to follow the path of spiritual purification and realization. Mahavira became an ascetic, renouncing material possessions and family life and, for the next 12 years, wholly devoting himself to the practice of meditation. One passage from the Acharanga Sutra, the oldest Jain scripture, tells of the abuse he suffered at the hands of irate villagers:

“Once when he sat in meditation, his body unmoving, they cut his flesh, tore his hair, and covered him with dirt. They picked him up and then dropped him, disturbing his meditational postures. Abandoning concern for his body, free from desire, the Venerable One humbled himself and bore the pain. Just as a hero at the head of a battle is surrounded on all sides, so was Mahavira there. Undisturbed, bearing all hardships, the Venerable One proceeded on the path of salvation.”

At age forty-two, Mahavira burned away the remnants of ghati, those karmas that are the residue of past acts and thus obscure the quality of the soul. He attained the state called kevalajnana, or kaivalya, infinite knowledge. For the next thirty years until his death, he taught from the luminous wisdom of this self-realization. He taught the presence of soul in all beings, that karma binds the soul in ignorance and suffering, and the importance of nonviolence or ahimsa to overcoming karma. According to tradition, Mahavira attained final liberation from the body in 527 BCE at age seventy-two. The freedom from rebirth that he is said to have achieved is called moksha or nirvana.