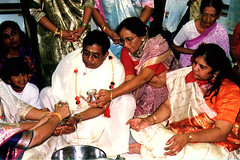 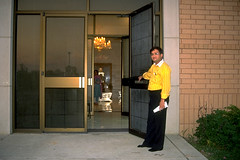 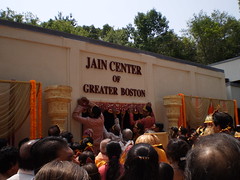 Jains have long been merchants and traveled outside India—to East Africa, Europe, and now to the United States. However, because orthodox Jain monks and nuns do not travel by vehicle and because they do not eat or stay at the residences of lay persons, the movement of Jain religious leadership outside India is virtually nonexistent. Even in the late twentieth century there are very few Jain sadhus and sadhvis who travel abroad, and those who have done so have met with criticism from more orthodox members of the community. Strictly speaking, only those who have not yet taken the full and final monastic vows are permitted travel abroad. Thus, in North America the interdependent relationship between renouncers and lay people that has been the sturdy backbone of Jain tradition for so long has been thrown out of balance. One response to this situation has been the creation among the Shvetambar Terapanthis of a distinctive order of monks and nuns, called samans and samanis, who are specially designated to serve the expatriate Jain community.

While new patterns of Jain life and religious leadership are being generated in Jain communities outside India, the ancient teachings are being reaffirmed. The central ethos of nonviolence has been articulated afresh throughout the world by Jains who see its important implications for today’s many political conflicts and increasing environmental devastation. Jainism is seen by Jains today as containing highly rational and universal teachings applicable to many of the problems of modern life. While some of the distinctive character of the Indian Jain community may be lost in transit to America, the universality of Jain teachings on the sanctity of all life and the relativity of all truth-claims seems to have been rediscovered and reaffirmed. Jains emphasize today that their views support and nourish not just the Jain, or even human, community, but the larger community of all living things.