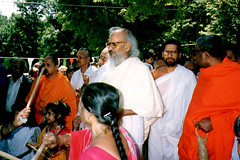 From the 6th century BCE until today, Jain sadhus and sadhvis, monks and nuns, have pursued the path of asceticism and renunciation. They are also called munis, literally the “silent” holy ones. Some among them are teachers, called upadhyayas, and some are heads of congregations, called acharyas. They represent the ideal of luminous self-realization achieved by the Tirthankaras and they strive toward that ideal. On taking diksha, or initiation into the monastic life, Jain men and women pull out their hair, give away their possessions, and leave behind worldly existence, including family, in favor of a simple mendicant’s life of self-reflection, service, and teaching.

There are two major ancient branches of Jain monasticism which began to emerge as early as the fourth century BCE, although the split was not finalized until many centuries later. The more conservative monks of the Digambar “sky-clad” tradition renounce even clothing or, one might say, they take as their clothing only the natural environment, the four directions. The Svetambar or “white clad” monks and nuns wear two pieces of white cloth. The Digambars insisted that Mahavira gave up all possessions, including his clothing, at the time of his great renunciation, while the Svetambars held that he was given a divine garment of white cloth, which he wore until it caught on a thorn bush and fell from his body. He did not pick it up again.

These two branches have also preserved distinctive scriptural traditions with their own variations on the story of the life of Mahavira. They also disagree on whether women are capable of attaining liberation. The Svetambars hold that the nineteenth Tirthankara, Malli, was a woman and that women can attain full enlightenment, while the Digambars insist that a woman must first be reborn in a man’s body. These two sects have further monastic subdivisions or orders. For example, among Svetambars there are Murtipujaks, who do puja before the murtis (images) of the Jinas, and Sthanakvasis and Terapanthis who don’t, and who, in fact, reject the use of images. Interestingly, however, despite the multiplicity of Jain sectarian orders, there is a high degree of doctrinal unity in the Jain tradition.