Anekantavada: The Relativity of Views 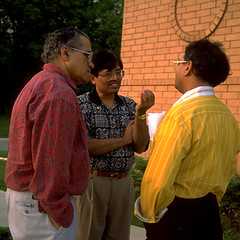 Anekantavada: The Relativity of Views

Philosophical and religious arguments about the nature and origin of reality are as old as human history. In India, sages and philosophers held many metaphysical views and were in constant dialogue and argument with one another. The Jains were active participants in the debates, and among their central tenets was the position referred to as Anekantavada. Translated literally, it means “no-one-perspective-ism,” in other words, the multiplicity and relativity of views. By this, Jains meant that in many cases the arguments espoused by the various participants in a debate all held some validity. Because the Jain position was able to overcome the apparent inconsistencies between the other views, however, it came closer to fully grasping the one underlying truth, satya.

Jains thus regarded both Buddhist “nihilism” and Hindu “eternalism” as correct and yet incomplete. Instead, they advocated holding simultaneously to the eternal, innate purity of the soul and to the reality of the soul’s connection to karma and, hence, suffering. Likewise, contemporary Jains reject the absolutist “either/or” that characterizes much of traditional Western logic, taking instead the relativist stance that for every question there are many “right” answers that reflect from different angles and in varying degrees the one truth, satya.

A well-known story from Jain mythology helps to illustrate Anekantavada. Five blind men have never seen an elephant. When one day an elephant is brought to the village, the five approach, touch and attempt to describe it. One man, who is standing by the trunk, describes it as a thick branch of a tree. The man who feels the tail disagrees, insisting it is rather like a rope. The man who touches the side, in turn, submits that the elephant is actually like a great wall. But the man at the elephant’s leg says it is like a pillar, and the man who gets hold of the ear describes it as a huge fan. Luckily, a wise sixth man is nearby to mitigate the dispute. He proclaims that, in fact, all are right, but only partially right. An accurate description of the elephant lies in combining the various partial views. Consequently, a complete understanding of any truth requires the consideration and acceptance of a variety of viewpoints.

While Jains have strong convictions, especially about such moral basics as ahimsa and vegetarianism, there is a resistance to philosophical dogmatism. Many Jains in the West see the Anekantavada approach as nurturing religious tolerance because religious views are approached as differing perspectives and therefore, perhaps, expressions of the same truth. An American Jain today puts it this way, “If a Jain sits down with a Muslim, for example, it is actually his duty to listen to the Muslim’s beliefs and to learn from him.”

By recognizing the relativity of views, Jainism has become a highly individualized religion. There is no central creed or set of dogmatic beliefs. There are as many paths to enlightenment as there are rivers to the ocean. Unlike creed-centered religions, Jainism focuses more on the questions of life than the answers. The tradition does not emphasize specific beliefs, but rather provides a framework of ethics within which the soul must find its own way to liberation.