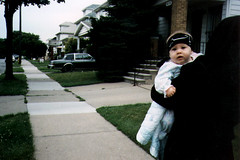 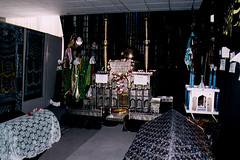 Muharram is the first month of the Muslim lunar calendar. For Shi’i Muslims, it begins with a time of mourning to commemorate the death of Husayn, grandson of the Prophet, and his infant son on the battlefield at Karbala in Iraq in the year 680 CE. This event has assumed great significance for the Shi’i community in times of persecution and oppression, as Husayn’s martyrdom provides an example of selfless sacrifice in the cause of God’s justice in the face of human injustice.

At Muhammad’s death, the majority of his followers elected Abu Bakr as the first caliph to lead the community. A dissenting group believed that the spiritual and temporal authority of the Prophet rightly belonged only to the descendants of the Prophet, through his daughter Fatima and his son-in-law Ali (b. Abi Talib). This group became known as Shi’at Ali, the “partisans of Ali,” a name later shortened to the Shi’ah. Ali became the fourth caliph, but his sons were challenged by the Syrian commanders who became the Umayyad caliphs. After his older brother conceded, supporters of Husayn suggested he come to Iraq, but they failed to provide him with protection. In a battle with the troops of the caliph Yazid, Husayn’s party was cut off and slaughtered.

Shi’i Muslims commemorate this tragic martyrdom by mourning for the first ten days of the month of Muharram, a commemoration culminating in Ashura, the tenth. In Dearborn, Michigan, about a quarter of the population is Arab-American, many of them Shi’i, and most of them now in the second and third generation. More than a dozen masajid in the Detroit area, such as the Islamic Institute of Knowledge on Warren Avenue and the Islamic Center of America on Joy Road, are packed with worshippers on the first night of Muharram. Indeed, they may have several services a day during this ten-day period, with video hookups that allow every part of the masjid to be utilized for the services. Each service includes Qur’anic reading, a sermon, and prayer. Worshippers place small circular clay pieces on the ground before them as they pray; these clay discs are made of the soil of Karbala, the sacred place in Iraq where Husayn was martyred.

Distinctive to this period is the taziya, the recitation of the story of the death of Husayn and a ritualized lament for his martyrdom. The hundreds of people gathered in masajid in Dearborn wear black for these services. Adults, teenagers, even infants may have black cloth strips tied about their heads, with the lament “Oh Husayn! Oh Karbala!” written on them. In some masajid, the taziya may be enacted as a “passion play” of the martyrdom. Whether the taziya is enacted or recited, the community participates with a refrain of lamentation, each person striking his or her chest with a fist as a symbolic gesture of mourning.

On the seventh day of Muharram, women from the community gather in one of the masajid to observe what they call the “marriage of Kassem.” Kassem was the son of Husayn, martyred as a child at Karbala. At the head of the procession, which is both a wedding procession and a funeral procession, women wearing black with black headbands bear trays of flowers and candles held high above their heads. At the microphone the dead Kassem’s mother calls to the betrothed bride of Kassem, “Come out, come out, oh Bride, and look around.” It is a haunting refrain. Women join the procession, lamenting, slapping their hands against their chests, weeping for the dead who never had a chance to reach the prime of life.

The collective voice of the community during Muharram is one of mourning, but also of solidarity—wearing black, coming daily to the masjid and often staying late at night, participating day after day in the story of suffering. Sweets, pastries and other special dishes prepared for these days are brought to the masjid, shared, eaten as a blessing, and brought home to those who are bedridden or unable to attend.