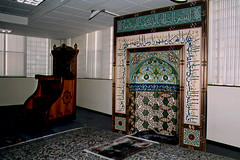 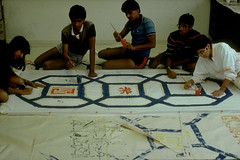 Islam is often called a “religion of the Book” because of the centrality of the written Qur’an. In Islamic art as well as architecture, the written word has assumed extraordinary value. Although according to tradition Muhammad was himself illiterate, the first revelation ordered him to recite; the full Qur’anic revelation he received was later written down in Arabic, the language of the revelation, in order to preserve the Divine Word.

Muslim calligraphers trace their artistry back to ’Ali b. Abi Talib, cousin and son-in-law of the Prophet. Although copying the Qur’an in beautiful script was a meritorious spiritual act in itself, early copies of the Qur’an were mere supports for the memory of reciters. For these early Qur’ans, the Kufic script with block letters was the liturgical script of choice. Calligraphers developed it, embellishing the script with flower and leaf motifs or plaiting the letters together in elaborate designs. Cursive scripts became prominent in the palaces of khalifahs and eventually in the poetic and mystical texts of the 14th century.

The embellishment of Arabic script and the weaving of letters took on increasingly abstract form as calligraphy was used in architectural decoration. Stylized Qur’anic verses or pious sayings blended with traditional vegetal and geometric patterns in stucco and ceramic work, covering the facades of important buildings, ornamenting masajid, tombs, plates, and coins.

The religious art of Islam generally avoided concrete symbols and the physical representation of created things. Instead, Muslim artists developed elaborate Arabic script and ornamentation, emphasizing the importance of the Divine Word. In the newly built masajid in the United States, calligraphy appears in inscriptions and wall decorations: driving along Massachusetts Avenue in Washington, D.C., one can see a verse from Surat al-Nur emblazoned in blue above the arches of the Islamic Center; in Manhattan’s landmark masjid, kufic script adorns the mihrab. Modern Muslim artists in this country and around the world continue to experiment with the flowing shapes of the words, incorporating Qur’anic verses and sayings in abstract designs to ornament not only buildings but also posters, t-shirts, and diverse Muslim media projects. Technological advancements in desktop publishing and computer graphics allow for continuing expression and experimentation with the presentation of the Divine Word in Arabic script.