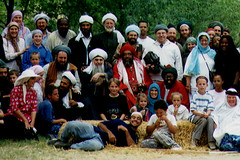 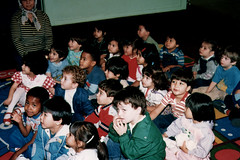 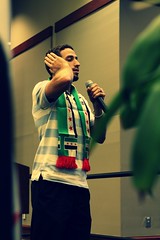 “O mankind! We created you from a single (pair) of a male and female, and made you into nations and tribes, that ye may know each other (not that ye may despise each other). Verily the most honoured of you in the sight of Allah is (he who is) the most righteous of you. And Allah has full knowledge and is well acquainted (with all things).” (Surah 49:13, King Fahd trans.)

At hundreds of Islamic centers and neighborhood mosques (masajid) across the United States, the diversity of the global Muslim community is evident. Immigrant Muslims have been coming to the United States since the late 1800s; the liberalization of immigration laws in 1965 stimulated a significant increase in both the size and diversity of the American Muslim community. During the late 1960s, indigenous Islamic movements in the African-American community, such as the Nation of Islam, were also experiencing steady growth. By the mid-70s, many of the new immigrants were forming schools and mosques (masajid), while the majority of African Americans affiliated with the Nation were beginning the process of integrating their mosques and schools into the mainstream Muslim community. In addition, tens of thousands of Euro-Americans converted to Islam during this period. Many new Muslims of all races have now come to Islam in America.

At the confluence of these multiple streams, indigenous and immigrant, is the American Muslim community. It is estimated by the American Muslim Council that, as of the early 1990s, the population of American Muslims was 42 percent African American, 24.4 percent South Asian, 12.4 percent Arab, 5.2 percent African, 3.6 percent Iranian, 2.4 percent Turkish, 2 percent Southeast Asian, 1.6 percent Euro-American, and 5.6 percent others. The diversity of the American Muslim community presents both unique challenges and tremendous opportunities, as people of different cultures and interpretations of Islam come into contact with one another. As Dr. Aminah Wudud Muhsin comments, “I like to see unity in diversity. I like to see us face the possibility of multiple Islams under one heading, which is really what Islam is all about. But it’s very difficult with real people. People get very sensitive to their own ethnic groups and to ethnic differences.”

In some larger cities such as New York, Los Angeles, and San Francisco, there appear to be as many different mosques as there are Muslims. In San Francisco “ethnic mosques” include those with primarily Turko-Tatar, Gujarati Indian, Yemeni, and Fijian populations. These mosques are open to all Muslims, but many experience de facto divisions because of linguistic or cultural differences. One young American Muslim termed this a “Baskin and Robbins of mosques…with thirty-one flavors.” Many are greatly concerned about the continuing division between communities comprised predominantly of “indigenous” Muslims of African-American heritage and those composed of “immigrant” Muslims; but efforts are being made to bridge this gap in communities across the country. The Ahmadiyya community, for example, has long included both African Americans and South Asian immigrants, who practice together in Ahmadiyya mosques around the country. In recent years, joint Eid celebrations, coordinated among all local immigrant and indigenous Muslim communities, represent an important gesture as thousands of Muslims come together to pray in convention centers and fairgrounds from California to Georgia, from New York to Texas.

While divisions do continue to exist, many American mosques bring together disparate peoples in a manner unprecedented in other American religious communities or in other Muslim communities. Racial and ethnic barriers, as well as Sunni/Shi’i divisions, dissolve in many American mosques, as American Muslims come together and pray. Side by side, shoulder to shoulder, are people who come from distant parts of the globe; they may speak different languages, but they hold a common faith. An African-American man in a suit and tie spends part of his lunch hour in prayer. Next to him sits a Pakistani teenager with baggy jeans and a baseball cap turned backwards. Beside him, an Arab man shows his young son how to perform prayers, while a Euro-American convert wearing a kufi looks on with a smile. In the women’s section, a young Indonesian woman covers her daughters’ street clothes with long white robes and veils. The woman to her right is African-American, wearing a brightly-colored turban. Beside her a Turkish woman rolls out a small prayer rug while a young Pakistani woman adjusts her loosely draped scarf. At Friday Jum’ah across the U.S., diverse groups of American Muslims come to greet one another, to learn about Islam, and to pray facing the mihrab that points beyond the walls of the room to the holy city of Makkah.

On the national level, ethnic groups often maintain their own distinct organizations and leadership. The Muslim American Society and The Mosque Cares, founded after the demise of W. Deen Mohammed’s American Society of Muslims, are some examples of organizations that were created particularly for African-American Muslims. However, in recent years, most American Muslim organizations have moved beyond those boundaries towards embracing the ummah as a whole. Such groups include the Islamic Society of North America (ISNA), and the Council on American-Islamic Relations (CAIR).

Such groups and the more ethnically delimited groups mentioned above have often collaborated to work towards strengthening the American Muslim community and supporting Muslims around the world, further emphasizing the pluralism of Islam itself. American Muslims are committed to bridging the divisions, whether linguistic, ethnic, cultural, or ideological, that separate them and to living out the beliefs and practices which unite them. Most American Muslims believe that these divisions are becoming less important among the current generation, particularly in the years following 9/11 as Muslim communities respond to heightened attention.

There is great optimism about Islam in America, as evidenced by Dr. Hasan Zillur Rahim, a Bangladesh-born American activist of the Bay Area Muslim community:

Immigrant Muslims can learn much from the rich, complex experiences of African-American Muslims… America provides a unique context in which to practice pristine and dynamic Islam. Here, where Muslims from all over the world gather, cultural accretions that sometimes pass for religion can best be discerned and isolated. Here, in the clash of opinions and the confluence of ideas, Muslims can best shape a middle ground to further peace and harmony among Americans of all colors and creeds.