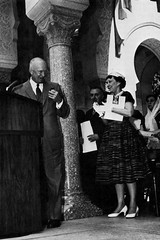 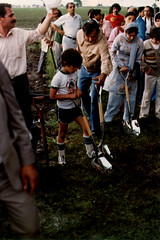 After the Second World War, many Muslims came to the United States as students seeking higher education and as refugees fleeing oppression. Beginning in the late 1940s and early 1950s, new American Muslims included displaced peoples, such as Palestinians and Soviet Muslims, as well as Muslim students from the Middle East, South and Southeast Asia, and Africa. This was a time of growth and development, when mosques built by ethnic communities began opening their doors to Muslims from around the world.

Many of the pioneer Muslim communities were already in their second generation. In Sacramento, the South Asian immigrants who came at the turn of the century established, in 1947, the first mosque built from the ground up on the West Coast. In 1952 members of the “Mother Mosque” in Cedar Rapids, Iowa, organized the first national Islamic organization, later known as the Federation of Islamic Associations. Two years later, the first Ohio Islamic center was established on Bancroft Street in Toledo, a city with nearly 5,000 Muslims. By 1955, there were already three mosques in the Detroit-Dearborn area, and a Muslim population of approximately 18,000.

On June 28, 1957, the Islamic Center of Washington, D.C. held its opening ceremony with President Dwight D. Eisenhower participating. Representatives from a growing network of Islamic societies across America were in attendance, from Maryland to Michigan and Minnesota, from the heartland of Ohio, Illinois, and Iowa, to California. At least nine New York-based Muslim organizations were represented, including the Pakistan League, the Islamic Mission of America, the American Islamic Educational Society, and the Muslim Council of New York. The American Muslim community in the late 1950s was small and diverse, but came together to celebrate this stunning new symbol of the presence of Islam in America. At the ceremony, the president of the Board of the Islamic Center explained: “For the Muslims in the United States who are a small minority, the Islamic Center will give an even closer feeling of identity with this land and its peoples.”

Muslims in America, although at that time “a small minority,” had established over 230 mosques by 1960. In 1963, the first Shi’i mosque, called Islamic Center of America, was built on Joy Road in Detroit. One year later, the first Islamic center in New England was constructed in suburban Quincy, Massachusetts. Few of the structures had been built as mosques; most were rented spaces as the young, diverse, and growing community began to establish itself. A large percentage of Muslims living in America in the 1960s were students: in 1963, the Muslim Students Association (MSA) was organized to promote religious unity among students from around the world who were coming together for the first time on college campuses. Like many of the first mosques, the MSA was born in the heartland of America, at the University of Illinois-Urbana. The MSA was to lay the groundwork for numerous national organizations, and as the students became citizens, they began to establish local mosques in their communities.

In 1965, with the elimination of a national quota system in U.S. immigration laws, the American Muslim community once again grew and diversified. Added to the turn-of-the-century immigrants and succeeding intermittent waves of refugees and students, came a new migration of Muslims. Highly educated professionals from South and Southeast Asia, Africa, and the Middle East, along with refugees from Iran and Afghanistan, were to make the next contributions to the American Muslim mosaic.