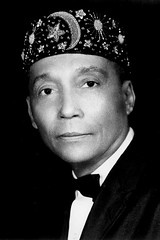 The early 1900s was a time of growth for the American Muslim community, due both to Muslim immigration and indigenous Islamic movements. In 1913, sectarian Islamic movements arose in the African-American community. These movements rejected the racism and economic deprivation supported by many white Christian movements in America and claimed an African history and culture identified with Islam. African Muslims in early America were prevented by slave owners from formally practicing or establishing their faith; twentieth-century movements among African Americans endeavored to revive the religion of their enslaved ancestors.

The first of these movements was started by Timothy Drew, or Noble Drew Ali, who claimed that he had been sent by God to reclaim the stolen black identity. He established the Moorish Science Temple in Newark, New Jersey, in 1913. He preached that black people were an ancient Asiatic race of Muslims that had once ruled Makkah and inhabited Africa, Asia, and America. This message held special appeal to African Americans faced with hostility and continuing injustice decades after the abolition of slavery. Noble Drew Ali wrote a special scripture, fostered economic independence, and involved members of his temple in active social service. By 1928, the Moorish Science Temple was established in Chicago as an incorporated religious organization; however, the movement splintered after the death of Noble Drew Ali just one year later.

Ahmadiyyah missionaries from India arrived in America in 1921 with literature and translations of the Qur’an, gaining many African-American converts. The movement established its first mission headquarters in Chicago the same year. From 1924, Shaykh Daoud Faisal’s Islamic Mission of America emphasized both American allegiance and the Islamic roots of African Americans. The late 1920s and 1930s also saw the establishment of the African-American First Muslim Mosque in Pittsburgh, Pennsylvania, and the First Cleveland Mosque.

The largest movement to reclaim Muslim identity among African Americans was the Lost-Found Nation of Islam in America. Established in Detroit in the early 1930s, the movement was initiated by Wallace D. Fard and developed by the Honorable Elijah Muhammad. Emphasizing moral uprightness and cleanliness, discipline and education, the Nation developed businesses, schools, and a strong sense of national religious identity among African Americans. Elijah Muhammad preached some Islamic principles, but he alarmed orthodox Muslims with claims that Master Fard was an incarnation of God and that he himself was a special messenger of God. Furthermore, his elaborate origin stories that depicted “Black Man” as the Original Man, and “White Man” as the evil creation of a scientist named Yakub, were antithetical to Qur’anic teachings of racial equality.

Many of these groups were only nominally Islamic, with teachings that were often in contradiction to the Qur’an and Sunnah, and are therefore alienated from the Muslim ummah. However, many of these movements provided an initial contact with Islam for African Americans, the vast majority of whom now accept an Islam that is more rooted in the traditions of the Qu’ran. Indigenous Muslims of African-American heritage now comprise over 40 percent of the American Muslim population.