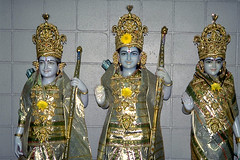 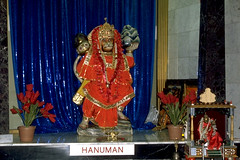 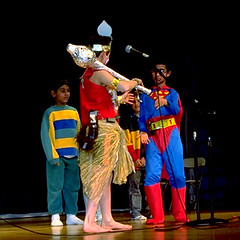 In the Bharatiya Temple in Troy, Michigan, the Hindu community gathers for Rama Navami, the annual festival celebrating Lord Rama. Bharatiya literally means the temple of India, highlighting the fact that this a pan-Hindu temple, not dedicated to a specific deity. Modern in its design, Bharatiya set on a wooded hillside in the northern suburbs of Detroit. Four huge arching wooden trusses support the roof of the carpeted sanctuary where more than three hundred people are sitting for the “Wedding of Rama and Sita,” the divine couple who are hero and heroine of the beloved Ramayana. The images of Rama and Sita have been brought forward on the raised platform which serves as the altar of the temple.

Rama is both worshipped and admired as a righteous king and a fully human incarnation of Lord Vishnu. Today Rama’s birth is celebrated and his wedding to Sita is re-enacted. Two families from the community are seated with the priests near the altar which bears the small images of Rama in a yellow silk dhoti and Sita in red silk sari and pearls. These two temple families are the sponsors of the rite, and they represent the families of Rama and Sita. When the auspicious moment called the “Gift of the Daughter” (Kanyadanam) arrives, the priest asks the whole congregation to join in repeating the familiar words, “I make the gift of my daughter in marriage. Kanyadanam aham karishye.” Then the mangala sutra, the auspicious wedding necklace, is placed over the head of Sita. For many Hindus, this necklace, like a wedding ring, is the symbolic marker of marriage.

The bestowal of the mangala sutra in every Hindu wedding is said to recall the wedding of Rama and Sita. Here in the northern suburbs of Detroit, families with daughters of marriageable age will ordinarily sponsor this divine wedding as the family of Sita. As the wedding ritual concludes, the priest asks the whole congregation to join in prayer. “Please pray if your daughter or son is to get married,” he asks. “Pray that they will get a good match and will enjoy the blessings of a good marriage.” It is a heartfelt prayer for the first-generation Indian immigrant parents who have made their choice to settle in Detroit, but are as yet unsure what this will mean for their children and grandchildren.

After the wedding ritual, the community gathers in the spacious temple auditorium for a talent show in honor of Rama and Sita. Included in their devotion is Hanuman, the monkey who was Rama’s foremost devotee and servant. Hanuman is, in many ways, worshipped more widely than Rama, for it is common to worship through the Lord’s closest servant and devotee. Hanuman is always present, on bended knee, at Rama’s altar. At the Bharatiya Temple in Troy, the junior high school group of the Hindu Heritage Class wrote and rehearsed a play that was the hit of the evening at the temple’s Rama Navami cultural performance: “Hanuman meets Superman.”

Arun Mehta comes out dressed in a fine Hanuman costume, his long monkey tail flowing behind him. Mohan Kapur is Superman, all in blue with the great red and yellow “S” on his chest. A high school group “playing it cool” gathers at the microphone, looking at the two heroes. “What is really the difference between Hanuman and Superman?” the leader asks.

One girl volunteers, “Hanuman can move with the speed of wind. After all, he is the Son of the Wind. He leapt to the island of Lanka to find Sita. He flew to the Himalayas in the heat of battle to get a mountain of healing herbs for Rama’s dying army.”

“But Superman can move with speed through the air, too,” counters another. “‘Faster than a speeding bullet,’ you know what they say.”

“Well, Hanuman has amazing strength. After all, when he couldn’t figure out which healing herbs to pick for Rama, he just picked up the whole mountain of herbs and brought it to Lord Rama.”

“But, Superman is awesome. He leaps tall buildings in a single bound.”

Back and forth they go, comparing the heroes Hanuman and Superman. Finally, the youngest in the group, stretched on his tiptoes, barely able to reach the microphone, cries, “Wait! I know one thing Hanuman has that Superman doesn’t have! He has Lord Rama in his heart!” And sure enough, Hanuman kneels and opens his chest to reveal Rama and Sita in his heart. More than his strength, more than his speed, more than his heroism, it is this—his love for Lord Rama—that has made Hanuman who he is.

The celebration of Rama Navami comes to a close. The divine marriage is completed. The talent show winds down in the auditorium. And the community gathers for supper in the adjacent dining room. There are rice and curry dishes, mango chutneys and lemon pickles, and water tumblers bearing the insignia of the Detroit Tigers.