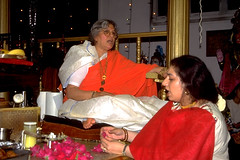 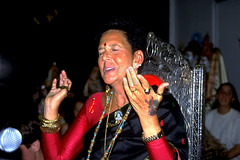 The Goddess goes by many names in the Hindu tradition. She is Parvati, the wife of Shiva. She is Lakshmi or Bhu Devi, the wife of Vishnu. In some cases, her role as a “wife” fades almost completely, and she stands on her own as Durga or as Kali, her many arms and many hands filled with the weapons of all the male gods. She is omnipotent, to be sure. Among her names is Shakti, which means sheer energy or power. Her most common name, however, for those who come to her in prayer is simply Ma, or Mother.

Hindus readily see the powerful presence of the Divine to be manifest in female form. Coming before the Supreme God and pressing one’s hands together in prayer, saying, “O Mother!” is common in the Hindu tradition. In America, the Divine Mother is celebrated in many ways. Her main festival is called Durga Puja, taking the name of the goddess Durga. The festival takes place over the course of the “Nine Nights” and is also called Navaratri. In India and in America, beautiful images of the Goddess are made and worshipped during this time. They are temporary images, crafted and consecrated only for the duration of the festival. The Durga Puja in Edison, New Jersey has become famous as one of America’s largest religious festivals. More than 10,000 people flock to the huge tents erected at the Raritan Convention Center. Every weekend for four weeks they celebrate the Goddess and dance the traditional garba “stick dance.”

There are also particular women who are said to embody the presence and power of the Divine and are, therefore, referred to as “Ma,” by their followers. In any Vedanta Society temple, for example, one will see the image of Sarada Devi, the wife of the saint Ramakrishna, who was held to be the embodiment of the Goddess. In modern times, there are many “Ma”s who attract followers around the world and in America. In Hempstead, Long Island, Guru Maa, is a teacher and religious leader who is accorded the respect and love of the Divine Mother by the members of her community, who seek her out for both her advice and her blessings. The same is true of Ma Jaya Sati Bhagavati of the Kashi Ashram community in Florida, who is loved by her followers as an embodiment of the Divine Mother. Both Ma Jaya and Guru Maa perform puja to the Gods, especially to Hanuman, Shiva, and Devi. For their congregations, however, both women evoke the powerful presence of the Divine Mother and are honored as such.

One of America’s itinerant “Ma”s is Mata Amritanandamayi from Kerala, India. She has an ashram community in San Ramon, California and many local circles of followers throughout the country. She is seen by her followers as the “universal embodiment of the Divine Mother.” When she visits the United States, as she often does in the summer, both Euro-American and Indian immigrant followers come by the hundreds to be with her. Her gatherings resound with the singing of devotional bhajans. People sit in line, often for many hours, to receive her darshan, which is in the form of an embrace and blessing. She is often referred to as the “hugging saint.” Her devotees speak of her as Amma or Ammachi, both terms of endearment for Mother. During a particular kind of darshan called Devi Bhava, she manifests herself, both in dress and spirit, as an embodiment of the Divine Mother. One devotee from the Miami area, an immigrant from Kerala who has traveled as far as New York to see Ammachi, puts it this way: “With Ammachi there is no language barrier, no religion barrier. She calls all people her sons and daughters. People go to her one time and they feel it. They put their heads in her lap. She understands them, in any and every language. Ammachi is an incarnation. She is now taking the form of Mother.”