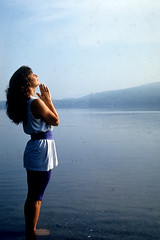 Yoga is a household word in late twentieth-century America. Some Americans associate it most readily with exercise, fitness, and weight loss programs. There are popular magazines on yoga, books on yoga, and video tapes offering instruction in yoga for flexibility, strength, and relaxation. There are major yoga centers such as the Kripalu Center in western Massachusetts; the Integral Yoga Institute in Buckingham, Virginia; Yogi Hari’s Ashram in Ft. Lauderdale, Florida; and the Himalayan Institute of Yoga Science and Philosophy in Honesdale, Pennsylvania. All offer courses and training, workshops and retreats. Those who flock to these centers and to the hundreds of other yoga centers and classes in American cities are largely Euro-American and African-American aspirants. The Yoga Teacher’s Directory at the back of Yoga Journal lists teachers of yoga from Birmingham, Alabama to Boise, Idaho. The practice of yoga was already rooted in America before the new wave of Hindu immigrants from India came in the 1970s and 1980s.

While its physical benefits are attested by many, the ancient Indian tradition of yoga is a discipline of joining body and mind in various disciplines of meditation. Yoga is a Sanskrit word, deriving from a verb meaning “to yoke” or “to join.” It is both physical and spiritual discipline to which one freely “yokes” oneself; at the same time, it is a regimen which “joins” body and mind in the project of spiritual transformation. Yoga presupposes the “mind-body” link that has now become a widely shared “holistic” view of the person. Exploring this “mind-body” connection is an integral part of the world view known as the New Age.

As described in the ancient Yoga Sutras of Patanjali, said to have been written in about the second century BCE, the path of yoga begins with ethical restraints and observances. In other words, the practice of yoga rests on a foundation of morality—non-violence, truth-telling, not grasping after material possessions, observing sexual morality, and not stealing. Beyond this, yoga involves postures, called asanas, some in a standing and some in a seated position. The most commonly known of the many asanas is the padmasana, the cross-legged “lotus posture.” Yoga practice takes the body seriously; training the body to be both flexible and stable is important to the spiritual quest.

Yoga also involves focusing attention on the breath, bringing the ordinary, irregular, and unconscious process of breathing into the realm of consciousness. The breath itself becomes an object of sustained meditation, reining in and stabilizing the mind’s stream of thoughts and associations, so strikingly compared to a pack of unruly monkeys. Patanjali puts it simply: “Yoga is stopping the whirlpools of the mind.” Both the disciplines of body and breath bring the mind to “one-pointedness.” The common image of the yogi, seated in a lotus posture or standing in a posture of reverence, embodies the one-pointed stillness and concentration of both body and mind.

The affinity of yoga and what one might call the “American temperament” began a century ago with Swami Vivekananda who taught widely what he called raja yoga, the “royal yoga,” which he described as both “mystical” and “psychological.” He saw it as a spirituality based on the cultivation of concentration. Vivekananda wrote, “In the present state of our body we are so much distracted, the mind is frittering away its energies upon a hundred sorts of things. As soon as I try to calm my thoughts and concentrate my mind upon one object of knowledge, thousands of thoughts rush into the brain. How to check that, bring it under control, this is the whole subject of Raja Yoga.” As Vivekananda saw it, the chemist, the astronomer, the professor, the working person—all are able to excel in what they do only by concentration, bringing the mind to one-pointedness. So it must be with the spiritual life, the disciplines of body and mind that will lead to clarity and concentration in the realization of God.

The publication of Raja Yoga in 1900 provided, in summary form, the teachings of the practice of the postures of the body and the control of the breath. It has been in print in the United States for nearly a century. Swami Yogananda, beginning in the 1930s, also spoke to a wide audience through his Self Realization Fellowship. Both Vivekananda and Yogananda described the practice of yoga as “scientific,” a term they used in order to convey the insistence on verifying the attainments of yoga through one’s own experience. The inner terrain has been explored by yogis for well over 2,500 years, but to glimpse that terrain one has to set foot on the path oneself. This practical approach to spirituality has been appealing to generations of Americans.

By the 1960s, American scientists were undertaking another form of verification: monitoring yogis to see if their deep states of mental concentration really did enable them to alter their blood pressure, body temperature, and metabolism. In the past thirty years, medical science has confirmed through such experimentation that yoga and meditation have positive health benefits. The deep concentration, called samadhi by the yogis and meditators, is referred to as a “hypometabolic” state by medical researchers, a state of deep and attentive rest that reduces the symptoms of stress and can be directed toward relieving chronic pain or lowering high blood pressure.

Over the past several years, teaching yoga in schools has become a much-debated, sometimes controversial, topic. While advocates of yoga education purport that the health benefits of doing yoga are such that they should be incorporated into physical education classes, opponents express concern that yoga is a Hindu practice. Because of that religious connection, they say, it is not right for yoga to be taught in schools.

The road from India’s Patanjali in the second century BCE has led to America’s laboratories where medical researchers have tested the physiological value of yoga-based meditation techniques, and to America’s hospitals where a range of mind-body clinics and biofeedback programs today teach basic meditation practice. And the path of yoga has also led to a plethora of “new age” institutes and centers that bring the “mind-body” connection into popular culture. The quarterly publications of the Omega Institute in upstate New York or Project Interface in Boston, for example, contain an impressive array of mind-body workshops: Body and Movement, Kundalini Yoga, Hatha Yoga, Breathing into Wholeness, Transformational Breathing, Healing the Emotional-Spiritual Body. A weekend conference brings a host of New Age luminaries together to address “the latest findings from the next frontier in healing: the link between body and soul.” The basic “mind-body” premise on which yoga is based has suffused a range of New Age spirituality in the United States and has brought millions of non-Hindu Americans into forms of spiritual practice that have their roots in India.

An attorney representing a family bent out of shape over a public school yoga program in the beach city of Encinitas filed a lawsuit Wednesday to stop the district-wide classes.

In the lawsuit filed in San Diego Superior Court, attorney Dean Broyles argued that the twice weekly, 30-minute classes are inherently religious, in violation of the separation between church and state.