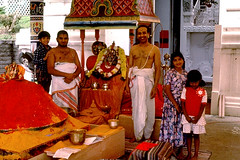 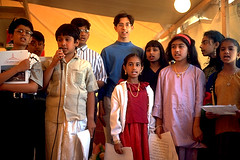 Some of America’s Hindu temples are among the most beautiful in the world. Their ritual life is conducted by priests from India, with elaborate and aesthetically beautiful pujas and abhishekas. Their special celebrations often extend over many days. “The main reason we did it is for our children,” said one of the founders of the large Hindu temple in Livermore, California. His words would likely be echoed by founders in every temple in America.

In the 1990s, Hindu American communities began to ask, “What will become of America’s new Hindu temples when the children grow up?” Some worried about having enough educational infrastructure in place to be able to recreate the religious knowledge that the second generation might have been more exposed to in India. Some complained that their children just did not understand what was happening during rituals at their temple. They knew the motions, but didn’t understand the concepts. Similarly, there was a fear that the second generation were only retaining cultural but not religious values. They were learning about India, but not Hinduism.

Most temples are now taking seriously the need for education and explanation, not just for the children, but for everyone. Festivals have become occasions for teaching as well as performing rituals. For example, the Lakshmi Puja at Divali will be interrupted as someone takes the microphone and explains the many traditions associated with the festival of lights. There are “children’s pujas” in which children come, with their parents, to sit together in the temple, an offering plate in front of them, and learn how to make the offerings. At the Ganesha Puja in New York, they learn the maha ganapati mantra and they offer the kumkum, the apples, the flowers on their offering plate to Ganesha.

The Sri Venkateswara Temple is Pittsburgh is one Hindu community that makes an exemplary effort to engage its younger generations. In November 2011, a gathering was held specifically to reach out to the youth who had grown up in the temple and had, in the meantime, themselves become adults with young families of their own. The Temple has hosted an annual summer camp for decades, which includes youth from throughout the United States and attempts to instill religious and cultural values. Throughout the year, the S.V. Temple sponsors Indian cultural events, hosting Indian and Indian American guest speakers, musicians, artists, and performers. The temple also offers academic scholarships, holds yoga, meditation and dance classes, sponsors youth conferences, and even holds language classes and SAT tutoring.

“The pendulum is swinging back,” said Dr. Uma Mysorekar two decades ago at the temple in Queens. “I too asked three to five years ago if the temples would survive in the next generation. Now young people are coming to the temple. It is very heartening. They want to learn. They want to be able to sit and ask questions.” Her statement remains true today. In 2009, as president of the temple, she oversaw the completion of a multi-million dollar renovation. At the maha kumbhabhishekam, a ceremony held to commemorate the end of the renovation and to re-consecrate the space, the temple was packed with youth and young adults.

Ground is broken for a new multi-million dollar American Hindu temple or a temple extension virtually every month. The future of these temples will soon be in the hands of the next generation. The Hindu Temple of Greater Chicago has a youth group that calls itself “In the Wings.” Whether the next generation now “in the wings” truly takes over the energy and commitment to the life of the Hindu temples is a question American Hindus, like many immigrant groups, continue to ask.