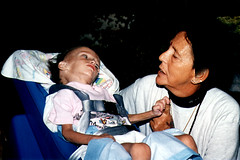 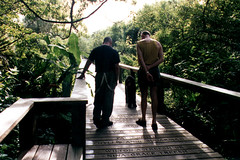 How might Hindu perspectives on life, death, and service be brought to bear on today’s America? Every night at Kashi Ashram in Florida, the community sings in Hindi the familiar words of the arati song, “Om, Glory to the Lord of the Universe. You are friend of the poor, remover of pain. You are my protector. Extend your hand, I am lying at your door!” And every day, members of the community find ways to extend their own hands to others in service.

India’s Kashi, more commonly known as Varanasi or Banaras, is one of India’s holiest cities. It sits on the banks of the Ganges, where pilgrims come to bathe. Hindus have faith that dying in Kashi brings the soul’s liberation. So Kashi is also famous for its cremation grounds, for it is a city that embraces death as well as life. Today, the River Ganges has come to Florida, and with it the spirit of the famous city of Kashi, whose name means the “luminous,” the city of transcendent light.

When Ma Jaya, a Brooklyn-born American woman of Jewish descent, founded an ashram with some of her disciples in the late 1970s, she gave it the name Kashi. In the years since then, the community has grown into its name. Service to those who are dying is central to the life of the community. Although Ma passed away in April 2012, her legacy and memory continue to live on. Ma’s “rounds” each week took her to the hospitals and AIDS hospices of West Palm Beach. Her van would be piled high with trays and platter of cookies and fruit, the fruit especially for those in public hospitals where, even in Florida, fruit is a luxury. Unloading the trays to push carts and trolleys, Ma and her company of followers would wind their way through the sterile halls of hospitals and homes. The cookies and fruit were really incidental to the real gifts they dispense: visiting, calling people by name, breaking the despair of institutionalized living and dying.

“There are no throw-away people,” said Ma Jaya. “Everyone is a child of God. Just fill another human being up, not with your judgment, but with your love.” At Hope House, Ma greeted a tall black man, pencil thin with AIDS, and an Hispanic man who had just developed tuberculosis on top of his AIDS. She hailed them, hugged them, asked after their mothers, their children, knew everyone by name, knew every story. In the County Home, Tommy, a paraplegic in a wheelchair, waited at the door for Ma. She kissed him, wiping the spittle drooling from the corner of his mouth. For more than an hour, Tommy joined the group from the ashram, up and down the corridors. There was Ivy, silently screaming, her mouth stretching wide as the universe, trying to speak. There was Susan, paralyzed from a car accident. The final stop in the waning hours of the afternoon was at Conner’s Nursery, where there were babies with AIDS, all needing to be fed or to be held.

Back at Kashi Ashram, Ma Jaya conducted a memorial service for Scott, a young gay man who had died of AIDS. His mother felt a chill from her own church when it became known that her son had AIDS. She wanted his service to be held in a place that was warm and accepting, which she found Kashi to be. She and a small group of family were joined by the whole community on the bank of the small lake called the Ganges. The service began with music and words of support. Ma Jaya herself spoke, remembering Scott with love. The ashes of the young man were sprinkled symbolically in the Ganges, in the midst of a community that is willing to embrace death. The family took a walk through the nearby forested area where the AIDS memorial boardwalk had been constructed, each plank inscribed with the name of a brother, a child, a father, or mother, who died of AIDS.

The Kashi Ashram, which now has branches in New York, Atlanta, Chicago, Santa Fe, and Los Angeles, is an umbrella for multiple groups that seek to serve the dying. By the River, a senior living facility in Florida, was a long-time dream of Ma Jaya that was eventually founded in 2004. It focuses on the poor and elderly and provides care in an eco-friendly environment that emphasizes mental, spiritual and physical health. Ma Jaya would make her rounds there, too. “The secret of the universe is love,” she insists. “That is the message of Christ. It is love that says to a person, lying in bed, ‘You are a human being, a child of God, not your disease.’ Service cannot be dry. It must be, it has to be, soaking wet, drenched in the love of God.”

The River Fund is another affiliate of Kashi, founded by Ma Jaya in 1990, which seeks to help those with long-term illness and especially AIDS, both in the U.S. and internationally.

The Kashi Ashram community continues to be largely Euro-American. It is self-consciously an interfaith community, with Christians and Jews in significant numbers, but it also values its links to the spiritual teachers of the Hindu tradition. The ethic of service is strong, and of all the shrines and temples of various faiths surrounding the small lake called the Ganges, the one that is most vibrant in the life of the community is the temple of Hanuman, the servant of Lord Rama. As Ma Jaya put it, “Hanuman, like Christ, is a servant, opening his heart to reveal the presence and love of God.”