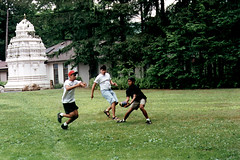 Summer camps are part of the experience of youth culture in America. There are camps for tennis, for computer skills, for learning about Jewish heritage, and now for learning about Hinduism as well. In the summer of 1993, there were more than eighty Hindu summer camps in America. Some were sponsored by particular Hindu temples, such as the week-long camp of the Sri Venkateswara Temple in Pittsburgh that took place at Slippery Rock State College. The Hanuman Temple in Hempstead, Long Island hosted a Vedic Heritage camp. There were weekend camps such as the one sponsored by the Vishwa Hindu Parishad in a state-park outside Houston or the family camp of the Chinmaya Mission at Endicott College outside Boston. There were both youth and family camps at Arsha Vidya Gurukulam in rural Pennsylvania, a retreat center located in a former Jewish camp in the Poconos and now a year-round facility for Hindu learning. And for college students, there were camps such as the one sponsored by the Hindu Students Council at Camp America in Ohio.

Many of the camps are headed up by swamis, such as Swami Sukhabodhananda who comes from India for the Sri Venkateswara. Temple Camp or Swami Dayananda who is the spiritual leader of the Arsha Vidya Gurukulam. They will give lectures on the Bhagavad Gita, the Ramayana, or the Mahabharata geared to the language of their young students. There may be lectures on Vedanta philosophy for the older students. And there are the all-important question and answer sessions, allowing youngsters to ask what is on their minds. These sessions have an urgency that goes beyond the questioning and challenging that is typical of the teenage years, because many of these Hindu youngsters are constantly being questioned by their peers in school on everything from the “worship” of the cow to the meaning of the Om. Now is their chance to ask, to connect with their tradition, to question and challenge it, and to begin to appropriate it for themselves. “We live with so many stereotypes,” complained a girl from Buffalo in a session at the Arsha Vidya Gurukulam camp. “Kids ask if I worship cows. In my school, even the world history teacher finds all the specific extreme cases of things like untouchability and idolatry and he passes it off as Hinduism. As if all Indians do this.”

Campers of all ages learn some of the mantras and Sanskrit verses that are central to the ritual traditions. They learn to perform the pujas and ask the questions they have about what they mean. “We had three discussions with Swamiji about pujas,” said one camper, speaking of Swami Dayananda. “The pujas really aren’t meaningless. They have meaning. It’s just that we had no idea what it is.” Yoga instruction may be offered at camp, and it is here that many of the young Hindus practice yoga for the first time. And, of course, they learn and sing bhajans. At a Vedic Heritage summer camp at the large Hanuman Temple on Long Island, campers learned the “Hanuman Chalisa,” or the “Forty Verses in Praise of Hanuman,” the most beloved hymn of the temple tradition.

Indian music and dance are also a common part of the emerging summer camp traditions. Bharat Natyam Dance is the sole focus of some camps, such as the three-week camp held at the Hindu temple in Nashville and the Yogaville Dance Camp at Satchidananda Ashram in Virginia. At Yogaville, Sri Dhananjayan, a dance master from Madras, put forty young Americans through their paces from 6:00 AM to 10:00 PM. In an article in the November 1993 issue of Hinduism Today, the dance master said that “[c]ulturally, this camp is to make the children identify with India and with Hinduism.” It seems to work. As one student wrote, “I have learned how to respect my gurus and also my culture and religion.” Another said, “Day by day the experiences, the lectures, and the sweat pieced together until dance was no longer just movement, it was an art. I came face to face with the unbelievable fact that this month, this fraction of a year, has the power to change a lifetime.”

In virtually every camp there are skits, plays, and performances. Some are written by the campers themselves, adapted from the storehouse of the Hindu heritage. At the Arsha Vidya Camp, they rehearsed and presented a play on the life of the great Vedanta philosopher Shankara. At the Sri Venkateswara Temple camp on the Slippery Rock campus, campers studied the Mahabharata and performed the famous “Dice Game” episode, when the hero of the Pandavas gambles away his kingdom, his brothers, and his wife, setting the stage for the unfolding drama of the epic. And at the Chinmaya Spiritual Camp at Endicott College, the teenagers wrote, rehearsed, and performed a philosophical drama exploring the Bhagavad Gita’s philosophy of acting without attachment to the fruits of action. “If you don’t pull an ‘A’ you’re a disgrace to your race,” lamented one camper, acting what seemed to be his own role as an American high school student. “The parents put a lot of pressure on us to excel in everything. So what does this Gita philosophy mean? What does it mean to not get attached to the fruits of action?”

As in many camps throughout the United States, Hindu teen campers enjoy volleyball and touch football games. Like in other camps, there are impromptu late-night discussions around the campfire. Here, however, the topics are often specific to the experience of “living in two worlds,” as many Indian-American teenagers do. Dating invariably comes up. Some Indian immigrant parents desperately do not want their teenagers to date. And, of course, the teenagers—just as desperately—want to date and often do, unbeknownst to their parents. With other teens who live in the same “two worlds,” the discussion is intense. Arranged marriages, vegetarianism, and temple rituals are other topics that can launch a heated after-hours discussion. “Hinduism is a common thread in our lives,” said one Arsha Vidya camper. “Coming to camp here is a chance for us to be the majority for once, to talk about the things that none of our friends at home really understand.”

Beyond all the activities, the sports, the lectures, and the plays, the camp experience gives young Hindus a sense of bonding and community. Some have renewed these relationships year after year. Eventually, they “graduate” from camp and return, perhaps during college, to be camp counselors.

College students, however, have their own camp traditions in the making. The Hindu Students Council has an annual summer camp in addition to its many academic year conferences and seminars. In the summer of 1994, it took place at Camp America in Oxford, Ohio. Its day to day offerings included an hour of hatha yoga and a series of lectures entitled “Why do we Pray?” There were study and discussion groups on domestic violence and participation in American politics. There were workshops for fun on application of mehendi, the traditional hand decorations popular for auspicious occasions such as weddings. There were boat trips, basketball games, and Frisbee matches. And in the evening, Camp America echoed with the sounds of bhajans sung around a glowing camp fire. The final day, the Fourth of July, was marked with a flag-raising ceremony. The Hindu Students Council continues to offer its annual summer camp, including its 20th anniversary celebration in 2010 that continued the tradition of addressing uniquely Hindu-American issues pertinent to youth in the present day. The report of the 1994 camp in the HSC newsletter, Samskar, concluded, “Students left the camp with a feeling of having become closer as a Hindu family.”