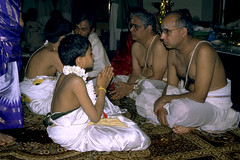 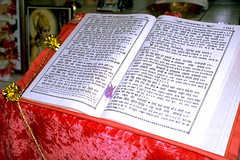 The earliest literary sources of the Hindu tradition are the Vedas, the legacy of the ancient Aryans. The term Veda means “wisdom” and, as such, it has both a specific and a general meaning. Specifically it refers to a body of ancient hymns and chants in which the “wisdom” of the ancient sages can be heard. It is called shruti, literally, what is “heard.” The Vedas were not read on the page, but recited orally in metered verse. The four collections of Vedic hymns were kept in perfect memory by lineages of brahmin priests.

The four Vedas are the Rig Veda, which consists of hymns to the various gods; the Sama Veda, which consists of chants and melodies; the Yajur Veda, which is comprised of ritual instructions and formulae; and the Atharva Veda, which contains hymns, popular incantations, and folklore. Each Veda is attached to associated literature called Brahmanas, which are concerned especially with rituals, and Upanishads, which explore a deeper philosophical understanding of the universe. The Upanishads and their interpretations are sometimes called Vedanta, literally the “end of the Vedas.”

In a more general sense, however, Veda means the wisdom and authority of the whole Hindu tradition. Many cherished religious texts are called “the fifth Veda” as a way of claiming this wisdom and authority. For example, the epic Mahabharata is sometimes called the “fifth Veda.” One of the most popular Hindu scriptures, the Bhagavad Gita or “Song of God,” is embedded within the narrative of the Mahabharata. The Sanskrit epic called the Ramayana is also regarded as a source of wisdom and authority, as is its Hindi vernacular rendering called the Ramcharitmanas. In south India, the ninth century devotional poem of Nammalvar is called the “Tamil Veda,” and is as revered as the ancient Sanskrit Vedas.