Karma: The Way of Action 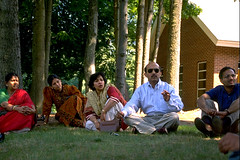 Karma: The Way of Action

Karma means simply “action.” Every action has its consequences. Whether for good or for ill, each action works out its effects, both in the world and within oneself. Karma is often used popularly in the West to mean “the results of past actions” inherited from previous lives, the mysterious circumstances that influence events. The exclamations, “It’s my karma” or “It’s bad karma” often convey a sense of fatalism and luck. Properly understood, however, karma is both one’s acts and their consequences—in the world and for oneself. Acts do have consequences, and the “law of karma” means that people truly never “get away with” anything. Every action leaves an imprint. The only way to free oneself of the entangling consequences of action is to act in a spirit of renunciation.

For active people, the path of action is also a spiritual path. Their temperament is oriented not toward inner realization (jnana) or expressive devotion (bhakti), but active doing. The path of action is one of engagement with the concerns and affairs of the world. But, as the teachings of the Bhagavad Gita make clear, the path of karma requires detached action. One must act virtuously without clinging to or even claiming the results of such action for oneself.

Learning to act energetically, yet without personal or egotistical attachment to the fruits of action, is the challenge of the path of action. Krishna’s advice to the warrior Arjuna in the Bhagavad Gita is to enter the fray of battle on the “Battlefield of Virtue” not with the heart of a hero, but the heart of a renouncer. Mahatma Gandhi often spoke of the path of action as his own path. It is a way of living a life of renunciation, even asceticism, while being fully engaged in the work of the world.