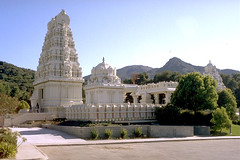 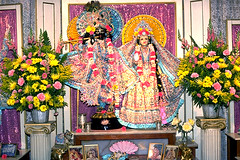 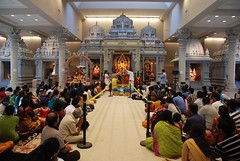 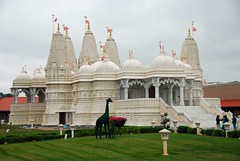 Hindus have long worshipped at wayside shrines, beneath the canopy of a tree or beside the waters of a pool. In about the 4th century, however, they also began to build permanent and magnificent temples of stone. These temples are laid out according to precise mathematical dimensions and proportions and erected to be the symbolic dwelling of the Divine on earth. The image of the deity for whom the temple is built is housed in a smaller sanctuary or “womb-chamber” (garbha griha) at the very heart of the temple.

Of course, Hindus will say that the Divine is everywhere, like the light of the sun. But the sun will not kindle a piece of paper lying on the earth. Only when a lens is used to concentrate and its power is refracted will the paper burst into flame. So it is that the temples and images of a deity focus and concentrate the presence of God. There are special texts or shastras used by ritual architects and artists to create the space suitable for the embodiment of the Gods.

A temple houses the image, or murti, of one or more gods. Just as clay takes many names and forms as the potter makes it into bricks, earthen vessels, pots and dishes, so the Divine is represented in many forms. Some of these forms are temporary, such as the small plaster image of Ganesha or the polychrome picture of Vishnu. At the outset, the worshipper invites the deity to be present in the image and, at the close of worship, gives the deity leave to depart again. In most temples, however, there are more permanent images, established with rites of consecration. Through “breath-establishing” rites, the image is infused with Divine breath and through “eye-opening” rites, the eyes are ritually opened, releasing the powerful divine gaze. These divine images are worshipped with a daily round of ceremonies, morning, noon, and evening.

Hindus go to temples for daily worship, for great festivals, and for pilgrimages. They go for darshan, “seeing” the divine image. Hindu worship is not only a matter of prayers, songs, and offerings, but of beholding God through the lens of the image. Hindus often travel to distant temples for darshan. Some of the great pilgrimage temples of India are located on hilltops, at the headwaters of sacred rivers, and the confluence of sacred rivers. These sacred places are called tirthas, literally sacred “crossings” or “fords.” For Hindus, India’s landscape is a sacred geography covered with such spiritual fords. In America, Hindus have begun to duplicate the familiar pilgrimage temples of India in the new temples they have constructed.