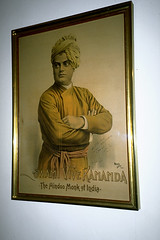 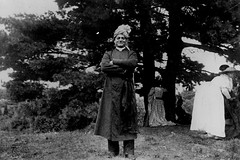 Despite more than fifty years of interest in Indian thought, few Americans at the close of the nineteenth century had yet met a Hindu. So in the late summer of 1893, when a handsome, young Hindu reformer, Swami Vivekananda, arrived in Boston before the opening of the World’s Parliament of Religions in Chicago, he attracted a great deal of attention.

Vivekananda had taken a ship from Calcutta to Vancouver and then traveled by train to Chicago, arriving more than a month early for the Parliament. He quickly ran out of money. Fortunately, on the train from the west coast he had met a Boston woman, Kate Sanborn, who had graciously invited him to her house in the country outside Boston. It was at her estate, Breezy Meadows, that Swami Vivekananda was introduced to a number of Bostonians, including Harvard Classics professor J.H. Wright. At Professor Wright’s invitation, Vivekananda came to Annisquam on Boston’s North Shore, where he delivered his first public lecture at the Unitarian Universalist Church. He subsequently spoke at Wesley Chapel in Salem and caused a stir wherever he appeared on the North Shore in his silk tunic and turban.

At the Parliament, Vivekananda was received with enthusiasm. He was surely the first Hindu most Americans ever heard speak in his own voice, on behalf of his religious tradition. Influenced by modernizing religious currents in India, he called for a universal religion “which would have no place for persecution or intolerance in its polity, and would recognize a divinity in every man or woman, and whose whole scope, whose whole force would be centered in aiding humanity to realize its Divine nature.”

In the two years following the Parliament, Vivekananda toured the United States, speaking in Madison, Minneapolis, Des Moines, Detroit, and many other places. At a summer encampment called Green Acre in Eliot, Maine he taught daily lessons in Vedanta, sitting cross-legged under a large pine tree. Swami Vivekananda also returned to Boston and Cambridge, where he discussed everything from spirituality to women’s suffrage, developed a friendship with William James, and lectured twice at Harvard. In 2013, the Center for the Study of World Religions and the Hindu Students Association at Harvard University commemorated Swami Vivekananda’s 150th birthday by hosting a conversation on campus in the very room in which he lectured over a century before.