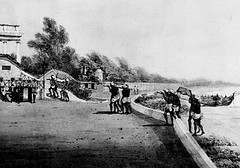 The ideas and culture of Hindu India have had an impact on America for nearly two centuries. The history of relations between India and America probably begins with the trading ships that sailed back and forth from Salem and Boston to India in the early nineteenth century, carrying “missionaries and ice” and returning with textiles and spices. In 1841, for example, one John Christian Frederick Heyer and three missionary couples left Boston bound for the East on a freighter with a cargo of 260 tons of ice packed in sawdust. By the middle of the nineteenth century, there were reports of Hindus participating in Salem’s Fourth of July parade. Today, the Peabody-Essex Museum in Salem houses a large collection of Indian arts and artifacts expressive of this rich period of commerce between India and New England.

In the nineteenth century, Hindu texts and ideas also became an active part of the intellectual life of New England’s most famous literary figures, Ralph Waldo Emerson and Henry David Thoreau. As early as the 1820s Emerson wrote of India in his journals. By the 1830s he had copies of Hindu sacred texts—the Bhagavad Gita, the Upanishads, and the Laws of Manu. He was especially attracted to the teachings of the Upanishads and the Vedanta, which speak of the unity of spirit linking the human soul and the Transcendent, the “unbounded, unboundable empire.” Emerson and his circle came to be called Transcendentalists, because of their emphasis on this transcendent oneness of spirit. By the 1840s, Emerson began to publish excerpts from what he called the “Ethical Scriptures” in the transcendentalist journal, The Dial.

Henry David Thoreau clearly had the Bhagavad Gita with him during his sojourn at Walden Pond, and it was no doubt through his book Walden that many Americans first encountered its ideas. “In the morning,” he wrote, “I bathe my intellect in the stupendous and cosmogonal philosophy of the Bhagvat-Geeta… in comparison with which our modern world and its literature seem puny and trivial.” In the winter, Thoreau marveled at both the physical and mystical connection between the land of the holy Ganges and his beloved Walden. As he contemplated the Bhagavad Gita from his hut, big ice-blocks of the pond he called “God’s drop” were cut and sent by rail to Boston and thence by ship to Madras.

Many New Englanders, especially those of the liberal Unitarian tradition, were drawn to what they learned of India’s religious ideas—its insistence on the oneness of the Divine, the deep linkage of the soul and the Divine, and the transcendent unity of diverse paths and ways. There were early connections between the Unitarians of Boston and some of the reformist “Hindu renaissance” movements in Bengal. The Unitarians particularly admired the reformer Rammohan Roy for his Vedanta idealism and his critique of Hindu polytheism in favor of what seemed for all the world a Unitarian perspective.