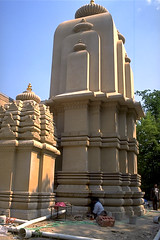 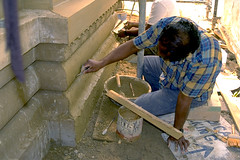 America has two “first” Hindu temples. The first to get started in the temple building process was the Hindu Temple Society of North America, formed in 1970 in Flushing, Queens. They worked for seven years to make the dream of a temple a reality, consecrating the Ganesha Temple on July 4, 1977. The first temple to be consecrated, however, was the Sri Venkateswara Temple in Pittsburgh, which got a later start but was consecrated on June 8, 1977.

By the time these two landmark temples were consecrated, there were already temple societies at work in such cities as Detroit, Albany, Houston, Chicago, Boston, and Los Angeles, laying plans for the building of a temple. The decades of the 1980s and 1990s saw large Hindu temples built in all these cities, as well as in Nashville, Dayton, San Antonio, Atlanta, Washington, D.C., Livermore, California, and many others. Temples have continued to be built, expanded, and renovated throughout the U.S. well into the twenty-first century. The Queens temple itself was renovated in a $4 million project that began in 2007.

India has a multitude of temples, but traditionally family rituals were performed at home. In many areas of India, this is beginning to change today as temples become the venue of private rituals. In the United States, many observe that this trend is continuing. Temples have assumed an extremely important role in the life of a scattered Hindu community, for preserving both religious and cultural identities. Hindu families will come to the temple for life cycle rituals, such as the upanayana, or sacred thread ceremony, and the wedding. The community gathers at the temple for new rituals as well, such as a Mother’s Day puja. Once the sanctuaries of the Gods have been built, the community has a second phase of construction in mind: the social hall with its large kitchen and auditorium. In some cases, financial considerations and the need for a community center have reversed the priorities. In Louisville, Kentucky and Orlando, Florida, for instance, the community hall was built first, with the full-scale temple construction planned as the next phase.

America’s great new Hindu temples signal the presence of a religious community that has taken to American ways, with the spirit of voluntarism that is so typical of America’s many religious traditions. Temple membership drives and fundraisers, temple publications and newsletters, videos of temple festivals, and audio clips of devotional music are all now part of the American temple milieu. The Hindu tradition has taken firm root in the cities and suburbs. How the next generations appropriate the ritual and community life of the Hindu tradition, both at home and in the temple context, remains to be seen.