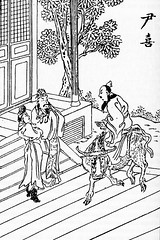 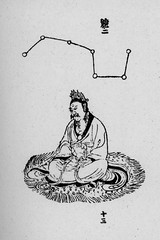 According to Daoist legend, in the sixth century BCE a mysterious sage known only as Laozi, or “Old Master,” decided to leave China in order to continue his self-cultivation among the barbarians to the West. As he reached the outskirts of civilization, a border guard asked to hear any words of wisdom that the venerable sage might offer. Laozi agreed to tell the man about the power of the Way. It is from this conversation that the enigmatic verses constituting the Daodejing, literally “The Scripture of the Way and its Power,” are said to have derived. Although the term dao has been employed in all Chinese religious and philosophical traditions, including Confucianism, Buddhism, Islam, and Christianity, the notion has gained central importance in the Daoist tradition.

According to the Daodejing and other Daoist texts, the word dao points to the ineffable creative process which gives birth to heaven, earth, and the myriad creatures. The Dao is invisible, inaudible, and subtle, though it is not separate from the sights, sounds and objects of this world. It is the process that leads from nonexistence to the full flower of existence, and back again. Hence, within nonexistence is the seed of existence, which in turn contains within it the seed of nonexistence. In Daoist thought, the interpenetration of these two came to be expressed in terms of yin and yang. The well-known diagram shows the dark mystery of yin and the white clarity of yang, tailing into one another, each carrying the seed of its opposite.

Despite the ceaseless process of the Way, nonexistence has a certain precedence in a person’s self-cultivation. This serves to counterbalance the human disposition to express the Way in any rigid or dogmatic form, or to reify fleeting aspects of the Dao as it has been manifest in the past. The Way symbolizes a powerful, living process that cannot be held or fixed by intellectual or spiritual fences. “The dao that can be spoken is not the eternal Dao,” states the opening passage of the Daodejing. “The name that can be named is not the eternal Name.” The Dao is mysterious, beyond the ken of human senses or human conceptualization. “The object of learning is to increase; the object of the Dao is to decrease,” says Laozi. One must, then, “learn to unlearn.”

A true sage is one who has mastered this art of learning to let go of the overly rigid categories of conventional knowledge. To others, such a person may appear stupid, dull, even irrational. In fact, such unconcern for conventional knowledge and values requires profound insight. Unlike other people who understand only partial aspects of the Way, the sage is so in tune with the cosmic process that he or she can anticipate the direction in which it is flowing. Recognizing the nascent “chaotic” (hun) stage when nothing is on the verge of becoming something, the sage interjects the potency (de) of the Dao coursing through the self into the process, thereby affecting how the pattern becomes manifest.

Most Daoists agree on the goal of becoming perfectly in tune with the spontaneity (ziran) of the Way, but very different understandings of just how to do so have given rise to immense diversity within the tradition. Philosophers such as Zhuangzi (c.369-286 BCE) and the Seven Sages of the Bamboo Grove (3rd century CE) advocated a simple, spiritual life far removed from intellectual and political disputes. Alchemists like Ge Hong (c.283-363 CE) took the stance that a perfect alignment with the Way results in a person’s attaining immortality. The most direct means to achieve this goal is to ingest potable gold and other elixirs. Since most people are unable to obtain the secret recipe or ingredients for such potions, Ge also recommended a wide range of techniques designed to lengthen the lifespan. By gathering herbs, undertaking long fasts and periods of purification, and engaging in breathing exercises and gymnastics, a person could aid the circulation and union of qi and jing, the vital life-forces pervading the universe but often obstructed in one’s body. Within each person’s body, qi acts as the active, yang energy inherent in the breath and continually nourishing the organs as it circulates. Jing is the subtle, latent energy, or yin; it is associated with the saliva and other bodily fluids. To remain healthy, each person must clear away the internal blockages that naturally accumulate through improper diet and conduct so that the two forces of yin and yang may freely circulate and intermingle.

The Shangqing tradition, which gained popularity in the late fourth century, elaborated upon the methods advocated by Ge Hong but considered even alchemy to be ancillary to practicing meditation in various forms. An adept would meditate in a remote location and visualize the characteristics of Jade Emperor (Yu Di), the Supreme One (Taiyi), Mysterious Mother (Xuanmu), and other gods while reciting their esoteric names and attributes. By doing so, the adept could simultaneously internalize these cosmological powers and ascend to the celestial realm, thereby gaining immortality and acting as a mediator between heaven and earth.

Soon after the Shangqing tradition rose to prominence, a competing group subsequently known as the Lingbao tradition appropriated many Shangqing scriptures and practices. Rather than retreating to a remote mountain, Lingbao priests engaged in meditation while leading communal rites of cosmic renewal. The visualization of divine qualities and recitation of esoteric names became only one component of a complex ritual process that often required the participation of an entire village. Lingbao masters played the central role in harmonizing earth, humanity, and heaven, but the presence and moral conduct of nonspecialists was also deemed essential to successfully performing the ceremonies. Just as participation was opened up to a wider audience, so too was the scope of salvation; the Book of Salvation makes it amply clear that the goal of uttering the “inner names” of the Heavenly Worthy (Tianzun) and other celestial lords was to gain salvation for all humankind.

Subsequent Daoist movements have all tapped into the diverse spiritual resources offered by Laozi, Zhuangzi, Ge Hong, and the Shangqing and Lingbao traditions. Some have mainly been attracted to the profound mysticism of the Daodejing or the liberating iconoclasm of Zhuangzi. Others have been drawn to the methods of gymnastics and pharmacology that are given rudimentary exposition in Ge Hong’s Baopuzi. Still others have perpetuated the forms of visualization and ritualization found in the Shangqing and Lingbao traditions. This extreme diversity in practice has led some scholars to question whether there really is a single Daoist tradition. For Daoists, however, the question is not whether there is a Daoist tradition, but whether a particular method effectively aligns one with the Way.