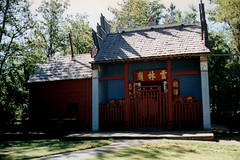 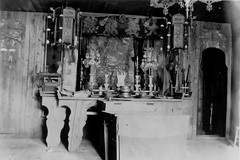 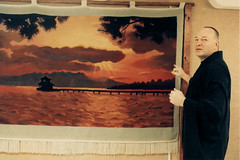 Soon after the first Chinese arrived in the United States to participate in California’s gold rush, they constructed several temples in San Francisco. The earliest of these were the Kong Chow Temple and Tin Hou Temple, both built in the early 1850s. The Kong Chow structure was small but ornate. On the central altar was red-faced, bearded Gong Di, the apotheosis of a general from the Three Kingdoms Period (220-265 CE), renowned for his bravery and loyalty. Nearby were images of the Jade Emperor (Yu Di), the god of wealth (Cai Shen), a subduer of demons (You’antan Fumo), the mother of the dragon king who rules the seas (Longwang Mu), the god of the city wall and moats (Chenghuang), the god of the earth (Tudi Gong), and the bodhisattva of compassion (Guanyin). The Tin Hou Temple was built to express gratitude to the Empress of Heaven for the protection she had provided during the long voyage from China. In its early years, the temple had only a small statue of Tian Hou (the Tin Hou from the temple’s name). Later, images of the god of literature (Huaguang) and the god of medicine (Huatuo) were added, as were tablets for Golden Flower (Jinhua, a goddess who aids childbirth, especially for women previously barren) and the god of the treasury (Zhanghuang Ye).

By the early 1880s, dozens of such temples could be found in San Francisco and other Chinatowns and hundreds of roadside shrines were scattered throughout the West. In larger temples, a caretaker was often hired to maintain the facilities, conduct sacrifices, and organize festivals, especially those associated with the patron deity. A plaque in the Won-Lim Temple of Weaverville, California made it known that the priest was to be hired for a three-year tenure, during which time he would live in the temple and receive $20 per year in exchange for his services.

Whether these early Chinese-American religious establishments should be regarded as representing Daoism, Buddhism, or folk tradition depends upon how broadly one defines Daoism. Laozi, the Supreme One, and the Heavenly Worthy are noticeably absent from the roster of worthies represented. With the exception of the Jade Emperor, none of the deities worshipped within these temples and shrines played an important role in Shangqing or Lingbao cosmology. Instead, they had independent origins as local heroes or savior figures. Only later were they absorbed into the Daoist pantheon. Many, including Tian Hou, have been claimed by Buddhists as well, just as the bodhisattva Guanyin has often found shelter in Daoist temples. Whether worshipping the Jade Emperor or Guanyin, Chinese have tended to be less concerned with maintaining an abstract doctrinal consistency than with establishing a secure relationship with a particular deity who could offer advice and protection.

After the passage of the Chinese Exclusion Act of 1882, which halted most new Chinese immigration into the United States, the various religious establishments gradually shut down. Today, only a few from that generation survive in San Francisco, New York, and other larger Chinatowns. Kong Chow Temple managed to keep its doors open until the 1960s, later reopening and relocating in the 1970s. Around that same time, the last Chinese family to worship in the Won-Lim Temple deeded it to the State of California, which has preserved it as a museum. Tin Hou Temple closed in 1955 but reopened twenty years later and continues to serve a small, Cantonese-speaking community.

Tin Hou Temple was able to reopen its doors because of the influx of Chinese immigrants following the passage of the Immigration Act of 1965. Since that time, numerous other Daoist organizations have also emerged. The Shrine of the Eternal Breath of Tao was founded in Los Angeles by Master Ni Hua-Ching in the mid-1970s. For the past forty years, this center has provided a host of activities, lectures, and publications to enable people to attune themselves to the “Integral Way.” Another active center is Fung Loy Kok Taoist Temple, founded in Denver by Master Moy Lin-shin in 1987. As with the Ching Ying Tai Chi Kung Fu Association of Chicago, the Wah Lum Kung Fu Academy of Cohasset, Massachusetts, and a growing number of centers across the nation, Fung Loy Kok specializes in teaching taijiquan. The largest Daoist organization in the United States is the network of Healing Tao centers. Since the early 1980s, Mantak Chia, trained in both Daoist practice and Western medicine, has trained hundreds of practitioners which have led to dozens of Healing Tao centers being established across the globe.

The characteristics and members of most of these contemporary associations differ significantly from the earlier folk Daoist establishments. The new Daoist organizations frequently have a large non-Chinese following. In many, such as the New England Center of Tao in Weston, Massachusetts and the Long Life T’ai Chi in Atlanta, Georgia, the students and even the teachers are Euro-American. Just as the membership contrasts noticeably with that of older folk Daoist organizations, so too does the emphasis on practice. The emphasis now is on becoming adept at taijiquan, massage, visualization meditation, and other forms of qigong in order to align oneself with the rhythms of the Dao, thereby promoting one’s physical, mental, and spiritual health.

The growing popularity of Daoist longevity techniques in the United States may be attributed in part to the perception of their compatibility with modern scientific and medical theories. Recent years have seen the emergence of taijiquan classes and centers in which Daoist terminology and cosmology are kept to a minimum. The Daoist origins of the methods employed are acknowledged, but little or no religious significance is attributed to the activities. Participants come to relax, increase their flexibility, and forget the stresses of work.

The effectiveness of taijiquan in accomplishing these goals has been acknowledged by the American medical community. In 1996, a study conducted by the Emory University School of Medicine found that training in taiji was more effective for improving the balance and strength of senior citizens than was a combination of computerized balance training and health education classes. Those who practiced taiji were found to have gained confidence in their physical abilities and to have significantly reduced their risk of falling. In the near future, one may not need to go to China to see large numbers of adult men and women circulating their vital energy through the slow, graceful motions of taijiquan.

The teachings attributed to Laozi himself have had an even greater influence on the general American public than have any of the Daoist longevity practices. The Daodejing has been translated into English more than any other Chinese work. Dozens of translations have been published since the 19th century. This is partially due to the text’s brevity and accessibility. Beyond this, however, the market for such translations rests upon a fascination with Laozi’s mystical teachings. Precisely because the Daodejing is so full of elliptical, subtle passages, it more easily transcends cultural boundaries than do most other religious or philosophical works. The integration of Chinese and American values has been popularized with the publication of Jonathon Hoff’s best-selling booklet, The Tao of Pooh and its sequel, The Te of Piglet.

Through the missionary activities of such masters as Ni Hua-Ching, Mantak Chia, and Moy Lin-shin, Daoist longevity techniques have been increasingly promoted as effective methods for revitalizing one’s emotional and physical well-being. Coupled with the appeal of such practices to an increasingly health-conscious America, the perceived trans-cultural accessibility of the Daodejing has further enhanced the popularity of Daoism. One may certainly see emerging a distinctly American brand of Daoist practice.