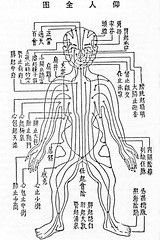 Although the term qigong, which means the “effort (or merit) of qi,” has only gained wide currency in China since the 1950s, the various techniques of longevity to which it refers have been employed for centuries and in some cases millennia. The goal of qigong is to aid a person in maintaining the proper balance of qi, or vital energy, and to enhance its free circulation throughout the body. One way of doing this is through meditation, in which the outer limbs of the body remain still while the person focuses his or her mental energy on directing the inner qi from one vital organ to another. The workshops on “Inner Smile” and “Microcosmic Orbit” meditation offered by Master Mantak Chia of the International Healing Tao Center, for example, are designed to train participants in techniques for “cleansing the organs,” thereby preventing disease and injury.

Directing qi throughout the body is never a purely mental task. The conduits directing qi from one organ to another are easily clogged by our eating habits and unnatural postures. In The Great Tao, Stephen Chang (founder of the Foundation of the Tao, located in Redwood City, California) observes that much ill health can be attributed to the lack of a balanced diet. By “balanced,” he means a diet including the right amount of yin and yang foods, that is, foods which either reduce or augment vital energy to sustain the proper level. For example, chili, cinnamon, root vegetables, poultry and beans are all yang; dairy products, green vegetables, sugar, and seafood are yin. These same Daoist principles inform macrobiotics, the holistic system of dietetics developed in Japan and introduced into the United States through the George Ohsawa Macrobiotics Foundation of Oroville, California, and the East-West Foundation of Brookline, Massachusetts.

The balanced flow of qi can also be maximized through performing a series of gentle gymnastic movements. Master Ni Hua-ching recommends that before a beginner embarks upon qigong meditative practices, he or she should first execute the stretching and twisting maneuvers of daoyin (literally, “pushing and pulling”). For some two thousand years, Daoists have been enacting this form of calisthenics to clear major internal obstructions and to catalyze stagnated qi. More advanced practitioners can then incorporate the “elegant exercise in eight sections” (baduan jin) and certain sexual practices into their repertoire of qigong techniques.

Taijiquan is another method for employing body movements to stimulate the circulation of vital energy. The phrase means literally “the fist of the great ultimate.” As with the term qigong, it is of relatively recent origin, dating only from the beginning of the 20th century. The relation between taijiquan and qigong is ambiguous. Daoist practitioners regard the two as intimately connected, usually classifying taijiquan as a form of qigong. Others, wishing to underline the physical and medical aspect of the practice and to de-emphasize any religious import, associate taiji with gongfu and other martial arts. All agree, however, that the slow, graceful, yet powerful movements act to balance the forces of yin and yang circulating within and around the practitioner.

At times certain blockages constricting an internal conduit require even more direct manipulation for their removal. Massage accomplishes this, as does acupuncture. Both of these can be performed by a person on him or herself, or by another person. In the latter case, the person performing the service can also transfer a portion of his or her own qi to the client, a technique regarded as especially necessary if the recipient’s level of qi is so low either throughout the body or in a particular organ that cancer or another serious illness has resulted. Such transferal can only be done by an expert, however, since a surplus of qi is as dangerous as a deficiency.

From the above discussion one can see that taijiquan and other practices associated with qigong have physical, psychological and spiritual implications. Those practicing taiji as a martial art emphasize the physical aspect. Others, finding the stretching and pulling of daoyin and taiji effective in relieving stress, achieve psychological benefits. For others still, the physical harmony and mental balance achieved are but indications that one has realigned oneself with the Way of the universe, an attainment of profound spiritual importance.