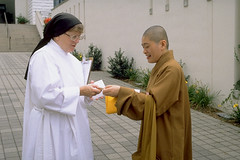 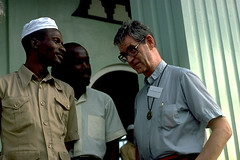 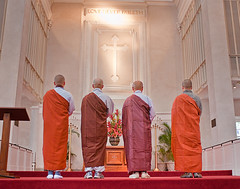 How should Christians relate to people of other faiths? As America’s religious landscape becomes increasingly multireligious, this question takes on new significance, in both practical and theological terms.

On the practical side, there are global, national, and even local issues that can only be addressed by developing cooperative relationships among people of many religious traditions. Christians and Muslims, Buddhists and Jews, Hindus and Humanists may explain their concern for human rights abuses, for the rising violence of American cities, or for the pollution of the waterways in different ways, citing different scriptures or teachings. Yet people from all walks of life increasingly recognize the need to work together in order to address these concerns. In this respect, many Christians understand interfaith dialogue to be a practical necessity in an interdependent world.

In American neighborhoods, some Christians find that interfaith dialogue has a new immediacy. For example, the children of a Southern Baptist family in Houston come home from grade school with Muslim friends, and new questions for both their parents and Sunday School teachers. Can I play at Ali’s house after school? Can Ali’s family come to church with us? Can we go to Ali’s mosque? The parents themselves may have new colleagues at work. In the next office or the next lab is a Sikh or Hindu colleague who is not simply “non-Christian,” but a person of faith who prays, sings devotional songs, and participates in a religious community at the gurdwara or temple.

For many years, Christians have been involved in overseas missions, sending missionaries to other parts of the world to preach the Gospel or to bear witness through medical assistance, educational programs, or relief work. Today, however, people of other faiths are not imagined neighbors in some other part of the world, but next door neighbors in Houston or Denver. While some Christians insist that the only appropriate relation to these new neighbors is evangelization, others emphasize the importance of relationship: listening to and learning from people of other faiths as well as sharing one’s own. Dialogue is the language of relationship and it means bringing one’s own faith into genuine encounter with the faith of a neighbor.

How do Christians understand the prayers, practices and community life of their Muslim neighbors? How do Christians think about Jesus Christ as “the way, the truth, and the life” in the context of Buddhists or Sikhs whose ways of faith are different, whose understanding of truth is informed by the teachings of the Buddha or of Guru Nanak, and whose lives are richly shaped by their own communities of faith? These are some of the theological questions that come to the fore for Christians in these encounters.

Some fundamentalist Christians read certain Biblical passages as texts of exclusiveness, limiting truth to the Christian tradition alone. For example, they would point to Biblical verses such as “I am the way, the truth, and the life. No one cometh to the Father but through me,” (John 14:6) and “There is no other name under heaven given among men by which we must be saved” (Acts 4:12). Other Christians insist that such passages must be understood as statements of deep personal faith, but not prescriptions for worldwide Christian exclusiveness. They would also insist that the message of Christ often holds up the stranger, the person of another faith, as a possible exemplar of faith—the Roman centurion, the good Samaritan, and the Syro-Phoenician woman, for example. Hospitality toward the neighbor and stranger is a teaching of Jesus that lies at the heart of Christian faith.

After September 11, 2001, conversations about the urgency of interfaith dialogue and the need to be knowledgeable about the faith of others gained traction in new ways. Several interfaith organizations began to mobilize their efforts in response. Under the leadership of the Reverend James Parks Morton, the Interfaith Center of New York began assisting immigrant and disenfranchised communities not only with integration into American civic and political life, but also by providing information about other religions with a focus upon common social concerns. Moreover, one month after Pope Benedict XVI’s 2006 Regensburg address, which led to a general misunderstanding of his references to Islam, 38 Islamic authorities and scholars from around the world, representing all schools of thought, joined together to deliver an unprecedented answer to the Pope in the spirit of open intellectual dialogue and exchange. In 2007, 138 Muslim scholars expanded their message to create A Common Word Between Us and You. For the first time since the days of the Prophet, these scholars declared a common ground between Christianity and Islam.

As America becomes increasingly multireligious, the necessity of interfaith dialogue will only become more important to American private and public life. Christians in their approach to other faiths, might look to documents such as A Common Word Between Us and You and the Roman Catholic Nostra Aetate, published during Vatican II as inspiration and guide for future conversations. In addition, several Protestant denominations have developed guidelines to help Christians reflect on their own faith in the context of interfaith encounter. For example, the United Methodist Church has published “Called to be Neighbors and Witnesses” and the Presbyterian Church USA has published “Interfaith Guidelines on Dialogue.”