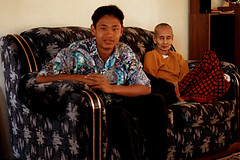 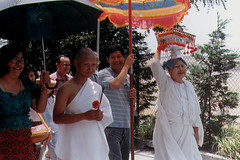 Today, in some American Buddhist communities, temporary ordination for the summer vacation has provided a healthy dose of traditional values for teenagers surrounded by a culture of gangs and violence. In Long Beach and San Diego, summer programs have included the temporary ordination of gang members into the Sangha.

In Long Beach in the middle of June, some soon-to-be novice monks circle the temple with their family and friends. They wear white lacy shawls, are shaded by the umbrellas of royalty, and are accompanied by musicians. The procession recalls the early life of the young Buddha, Siddhartha Gautama, the prince who lived a life of luxury before renouncing the world to seek the truth of suffering and the way out of suffering. Indeed, these boys are, in a sense, enacting the renunciation of the Buddha.

Inside the temple, the boys bow to their parents, asking their forgiveness for anything they may have done, knowingly or unknowingly, to hurt them. The parents themselves, having given their blessings and forgiveness, snip the first locks of their son’s hair. Then the boys retreat from the Buddha hall to have their hair and eyebrows completely shaved, so they will, in the words of their teacher, “pay attention to what is on the inside, rather than what is on the outside.”

Most of these teenagers have had little sustained instruction in their own Buddhist tradition. Their teacher for the summer is the Ven. Benton Pandito, an American-born monk who spent many years in Southeast Asia. Now, back in the United States, he has proven to be uniquely gifted in teaching Buddhism to young Cambodians whose world of reference is the American high school. They will live in the temple all summer, participate in the life of the monks, and even take a camping trip with their teacher.

The Newsletter of the Long Beach temple, Khemara Buddhikaram, contained the following question, put to the Venerable Benton Pandito: “I have a friend who is going to become a monk for the summer vacation. He is a gang member and I know he has done a few things that are not so good. When I heard from another friend that he is planning to become a monk, I couldn’t believe it. Can a ‘gang-banger’ become a monk? This guy is pretty wild and I don’t know if it will change him.”

The teacher’s response expresses the intention of monastic life:

In our religious tradition, there are four good reasons for young men to ordain as monks for a temporary time:
1. To offer respect and give thanks to parents by practicing as a monk and purifying your thoughts, words, and actions as a dedication to them.
2. To take a break or retreat from life in the outside world so that you have time to get to know your inside world, your own mind.
3. To have a chance to live in the temple as a monk and learn more about discipline, religion, and culture.
4. To be a good example for others.
Now think of your friend and ask yourself if it is possible for him to have at least one of these reasons. You know it may be possible for even a ‘gang-banger’ to have all four. I speak to you from my own experience when I tell you that I have seen some gang types become monks and they did very well. I have seen some ‘schoolboy’ types become monks and they didn’t last a week.
Also remember that we are not thinking of changing a person, because they have to change themselves. But what is important is that we give them a chance to take a break from what they were doing so that if they are ready to improve some things they have a better chance.
In Buddha’s Way, when we see someone who wants to do a good thing, we say ‘sadhu,’ which means, ‘It is well’ or that we are happy for that person that they are doing a good thing. So instead of saying something negative about your friend, why don’t you encourage him! If someone is thinking of becoming a monk because they want to, then we should give him a chance. I have enough past experience with ‘gang-bangers’ to see hope in each one of them. Do you know what I do if a ‘gang-banger’ comes and asks to ordain as a monk? First, I give him an application. And I tell him what Buddha said:
He who was once careless, but later became careful,
He who did wrong before, but overcame his wrong with right,
That man brings light to our world,
Like a full moon coming out of the clouds.”
(Dhammapada 13.6)