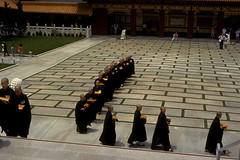 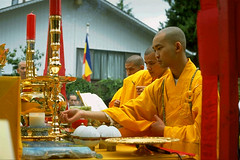 By around 200 CE, the beginnings of a new stream of the Buddhist tradition were visible within Indian Buddhism. This stream can be called the Mahayana, literally the “Great Vehicle.” In general, this movement of monks, nuns, and laity can be characterized as follows:

1. As the name implies, the Mahayana came to think of itself as “great” both in its interpretations of the Buddha’s teaching and in its openness to a broader group of people, especially lay people. The word yana means vehicle or raft which evokes the image of Buddhist teaching as a raft or vehicle that can help one cross over the river of suffering to the “other shore.” The Mahayana is, thus, the “Great Vehicle.”

2. The Mahayana tradition is more flexible about the orthodoxy of scriptures, regarding many new scriptures composed in the early centuries CE as authentic teachings. A number of new scriptures—the Lotus Sutra, the Avatamsaka Sutra, the Mahaparinirvana Sutra, and the Pure Land sutras—focus on teachings such as the emptiness of all phenomena (shunyata), the importance of compassion (karuna), and the universality of Buddha Nature.

3. The ideal religious figure in the Mahayana tradition is the bodhisattva, an enlightened being engaged in helping others become free from suffering. The bodhisattva is motivated entirely by compassion (karuna) and informed by deep wisdom (prajna). The bodhisattva ideal is often contrasted with the monastic arahant (arhat) ideal, characterized by some Mahayana schools as being directed toward self-liberation and thus as too egotistical.

Mahayana Buddhism was the first major stream of Buddhism in the United States, brought by the Chinese and Japanese immigrants who arrived in the nineteenth century. Today, the two main expressions of the Mahayana tradition, Zen and Pure Land Buddhism, have both Asian-American and Euro-American practitioners. In addition, Korean and Vietnamese immigrants introduced their cultures’ expressions of Mahayana Buddhism in late twentieth century America and have steadily gained their own followings.