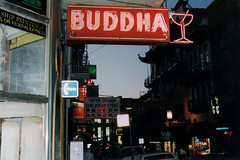 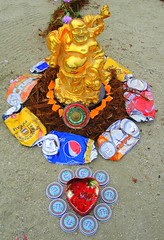 The 1990s saw the emergence of a “Hollywood Buddhism” or a Buddhism of celebrities which has continued to the present. The National Enquirer suggested that the Dalai Lama told Richard Gere to dump Cindy Crawford. A film about Tina Turner, What’s Love Got to Do with It, opens with the mantra chanting of the Soka Gakkai Buddhist movement. The Tibetan Namgyal monks went on a summer music tour, called Lollapalooza, with the Beastie Boys, whose song, “Bodhisattva Vow,” became a part of hip-hop culture. Bernardo Bertolucci’s film, The Little Buddha, follows a young Seattle boy who is seen as the reincarnation of a Tibetan lama.

It is clear that a celebrity embrace of Buddhism has played a role in the public perception of Buddhism. As writers such as bell hooks and Sallie Tisdale, politicians such as Jerry Brown, movie stars such as Richard Gere and Uma Thurman, and singers such as Jerry Garcia and John Mellencamp talk about their identity as Buddhists or their sympathies with Buddhism, the mass media began presenting a “pop” form of Buddhism to a wider American audience. Building on this interest and on a growing interest in Buddhist meditation practice, a national Buddhist magazine, Tricycle: The Buddhist Review, was successfully launched in 1991 by the Tricycle Foundation. The magazine continues to stay abreast of popular developments and features articles on the teaching and practice of Buddhism in contemporary American life, and is now just one of dozens of similar publications. Today, however, the Tricycle website goes beyond the magazine and features multimedia content, including a blog and a collection of online resources organized by Buddhist tradition (Vipassana, Mahayana, Vajrayana, Theravada, and Zen, among others).

The history of Buddhism in America is evolving as fast as it can be documented. A distinctively “American Buddhism” is in the process of emerging. It will be a more multi-sided, complex tradition here than virtually anywhere else on Earth, with immigrants from old Asian Buddhist cultures mixing with new Buddhists from Euro-American, African American, and Latino/a backgrounds. In Asia, most of the Buddhist communities had literally never met one another, having lived in relative cultural and geographic isolation in Thailand, Myanmar, Vietnam, Taiwan, China, Japan, Tibet, or Korea. Today, the United States is providing the context for a level of intra-Buddhist as well as interfaith contact and dialogue that is unprecedented in Buddhist history.