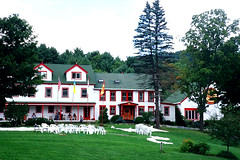 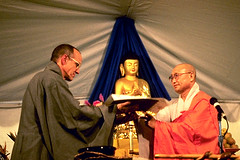 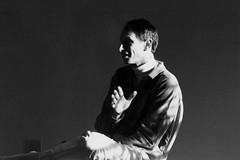 In the 1960s and 1970s, the Zen Buddhist movement began to establish centers and develop a more rooted community life. The San Francisco Zen Center (Shunryu Suzuki-roshi) was established in 1961, the Cimarron Zen Center in Los Angeles (Joshu Sasaki) in 1966, the Rochester Zen Center (Philip Kapleau) in 1966, the New York Zen Studies Society (Eido Tai Shimano-roshi) in 1968, Shasta Abbey in Northern California (Jiyu Kennett) in 1970, and the Zen Center of Los Angeles (Taizan Maezumi-roshi) in 1971. Many of these centers developed corresponding mountain retreats and became significant practice centers where longer-term Zen training could take place.

The Tibetan Buddhist tradition in the United States dates to the late 1950s, when Ngawang Wangyal opened a Buddhist monastery in Washington, New Jersey to serve the Kalmyk immigrant community. Tibetan Buddhism spread further in the 1970s, with the arrival of Chogyam Trungpa Rinpoche of the Karma Kagyu lineage. Trungpa developed a language that fused Tibetan Buddhist thought with practical pop psychology that appealed to young American professionals of the time. The first Tibetan Dharmadhatu centers were founded in rural Barnet, Vermont and in Boulder, Colorado and a network, united by the Vajradhatu organization, grew to include dozens of centers in every part of the country. Tarthang Tulku of the Nyingma lineage began the Nyingma Meditation Center in Berkeley in the 1970s. Within two decades there were centers of virtually every Tibetan monastic lineage in the United States—the Sakya centers in Silver Spring, Maryland and Cambridge, Massachusetts, Gelugpa centers in Washington, New Jersey and Ithaca, New York.

Interest in Tibetan Buddhism exploded in the 1990s. The tradition has an active support network of student organizations on college campuses, refugee and convert practitioners in temples, and prominent celebrity devotees like Richard Gere or the Beastie Boys. With dozens of books, numerous speaking engagements, and diplomatic visits with American presidents, the Dalai Lama has raised the profile of Tibetan Buddhism in the United States in the last three decades.

Finally, the vipassana or “insight meditation” of the Southeast Asian Theravada tradition also began to take root in the United States. The 1960s and 1970s found many young Americans in India and Thailand undertaking the serious practice of Buddhist meditation with some of the leading meditation masters of the Theravada tradition. Joseph Goldstein, a graduate of Columbia University, went to Thailand with the Peace Corps in 1962 and stayed to study vipassana in Bodh Gaya, India with Anagarika Munindra, a student of the Burmese master Mahasi Sayadaw. Jack Kornfield studied with the forest monk Achaan Chaa in Thailand. The two met during the first year of the Naropa Institute’s summer school in 1974, in Boulder, Colorado and began teaching together. In 1976, a group of vipassana practitioners bought a huge Catholic monastic house in rural Barre, Massachusetts, and created the first major Theravada retreat center in America, the Insight Meditation Society. In 1985, Jack Kornfield and others on the West Coast started Insight Meditation West and began the Spirit Rock Center in Marin County, California. Today there are dozens of vipassana meditation centers, large and small.

Central to all three of these streams of Buddhism is the emphasis on Buddhist practice. While Buddhism had been understood and received sympathetically by readers of D.T. Suzuki and other popular writers, it was not until the 1970s that Euro-American Buddhism focused intently on the discipline of meditation practice and began to build the communities and centers to sustain such practice. In 1988, when the first edition of Dom Morreale’s Buddhist America: Centers, Retreats, Practices was published, it included descriptions of 148 Mahayana centers offering instruction in some form of Zen practice; 67 Theravada centers with vipassana meditation practice; and 160 Tibetan or Vajrayana centers.

Not surprisingly by the end of the 1980s, there emerged a number of American-born and American-trained students of Buddhist teachers who received Dharma transmission and who can be said to be “second-generation teachers.” As centuries-long Asian lineages were passed for the first time to Americans, these teachers came to represent the first step in truly indigenizing and “Americanizing” Buddhism.