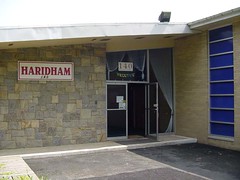 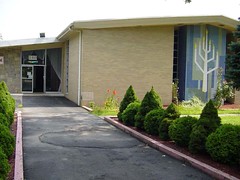 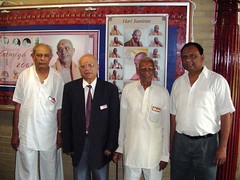 The New Jersey branch of the Yogi Divine Society started in Hoboken in the 1980’s. The small group met in the apartment of Mr. Pravin Solanki. As the community grew, they remained in constant contact with their Guru, Hariprasad Swamiji, who directed them in 1992 to seek a facility in New Jersey for their branch that would serve as their temple and community center. In November of 1995, they purchased a property in a residential neighborhood of Lake Hiawatha that had been a Jewish synagogue. Soon afterwards, the group purchased six houses in the neighborhood as well.

The Yogi Divine Society consists of a four-level hierarchy of male saints, female saints, families, and youth. It is administered world-wide by over 600 male sadhus, or celibate monks, and a few hundred female saints, all under the aegis of Hariprasad Swamiji. Over 5000 families world wide have received “Ambarish” initiation, which indicates that they have dedicated their lives as householders to their Guru, Hariprasad, and to the ‘Satsang’ (congregation). The first Ambarish initiation was in 1985. Temple and worship centers each have a nine-member board of directors that reports directly to Hariprasad Swamiji. Other levels of initiation are for “Sahishnu” youth, ages 18-35, who are celibate and are dedicated to the temples and to service, but who are also allowed to handle money. The first Sahishnu initiation was in 1991.

The Yogi Divine Society emphasizes the welfare and spiritual health of all people, especdially youth, and is heavily invested in an array of social services, medical services, and relief services for victims of natural disasters.

Worship consists of darshan, or viewing the images, pujas and arthi, conducted by a pujari, or priest, who is also a married householder. Arthi and darshan occur at set times everyday for individuals who come to the temple. Festival days are well attended by the whole community.