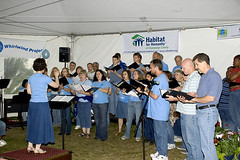 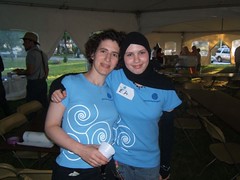 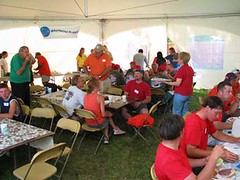 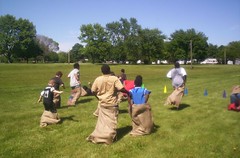 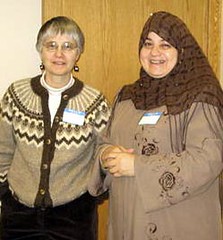 A Project is Brewing

In July 2001, Allison Fromm was helping to plan a performance of Handel’s Israel in Egypt which would be presented the following spring by the Baroque Artists of Champaign-Urbana, Illinois (BACH). A soprano and new board member, Fromm hosted a summer barbeque with Music Director Chester Alwes and a few friends to discuss the possibility of bringing the community together through the story of Israel in Egypt. Just as the Hebrew Bible story of the exodus in Handel’s piece resonated with her own tradition of Judaism, Fromm realized that this crucial story of slavery and freedom would also appeal to people of other religious traditions, such as Christian and Muslim groups, as well as other ethnic groups in the area, namely the African-American community. (1) The performance was not at a theater or a church; rather, it took place in a shopping mall in order to be more open and less intimidating to the public.

By the fall of 2001, the innovative idea of sharing music with various religious and ethnic traditions had been titled the Exodus Project and was sponsored by BACH. The first planning meeting took place on September 9, 2001, to decide what other kinds of creative happenings would draw people of different backgrounds together. With the events two days later, Fromm realized that “there was that much more of a need. People were drawn to trying to understand each other.” (2) When the charismatic imam of the Central Illinois Mosque, Mujahid Al-Fayadh, joined the project not long after, the project took off as members of the local mosque became involved.
The Project’s intention at the beginning was to create a one month festival in March of 2002 that would bring together music, arts, and people of different faiths in preparation for the BACH performance of Israel in Egypt. A featured event was the March 10th concert that took place at Salem Baptist Church. The program included Hebrew songs, Islamic chants, the Baptist Church’s Gospel Choir, and a preview of Handel’s oratorio, presented by the Baroque Artists. Each portion of the varied program tried to capture the essence of the Exodus story, the struggle with slavery and the gratification of freedom. More than 600 people attended the concert and, as Fromm puts it, “When we closed the concert with the entire audience singing ‘Lift ev’ry voice,’ we nearly blew the roof off that church.” (3) At the end of the program, many audience members came up to Fromm wondering about the next year. Thus, due to the overwhelming support of the community, the board decided to continue with the Project. “Because our aims were broader than music, it made sense to branch out and become an independent, non-profit organization,” Fromm recalls. (4)

From Exodus to Job to Whirlwind

The Project picked a new theme for 2003, the book of Job. In trying to make sense of the events of September 11th, the planners chose a biblical book that explored how impossible it is to justify reasons for evil and human suffering in the world. In the book of Job, God speaks to Job from a whirlwind. In light of this reference, the Project board decided to change the Project’s name from the Exodus Project to the Whirlwind Project. A year later, they discussed whether to keep the name and decided that the idea of a whirlwind spoke to more than just Job. It is like the whirlwind of people’s lives, and the energy that stirs people together. (5)

Although they believed in the interfaith effort, the members did not want the Project to be a smattering of interfaith dialogues. About two thirds of the Project’s work is devoted to creating musical and artistic events for the community. This initiative, according to Fromm, “gets people working and doing something together, not just talking. We have found that music in particular bridges a lot of gaps.” (6) With this belief at the core, the Whirlwind Project’s mission statement is as follows: “Whirlwind Project gathers people of many faiths and traditions to explore sacred stories through music, dialogue and the arts, fostering mutual respect and understanding in our community.” (7)

The Next Two Years

The 2004 theme of the Whirlwind Project was an exploration in different forms of meditation. Activities included concerts, poetry readings, interfaith meditations and experiential workshops. In 2005, the Project shifted gears again, and came up with the concept of ‘Chaos-Creation-Creativity,’ a theme that would explore creation stories in many different faiths. The opening international potluck dinner brought in creation storytellers from Hebrew, Muslim, Native American, African, and Hindu traditions. (8) There was also an array of concerts, exhibitions, festivals, and literary readings.

A Whirlwind of Activities in 2006

The board of the Whirlwind Project wanted to branch out more into the Champaign-Urbana community in 2006, and consequently came up with a theme titled ‘The Art of Being Neighbors.’ This theme has opened the project up to a wider variety of community members, especially to families and people from eastern cultures and traditions. New events and programs have been formed, and are described in detail on the Project’s website. (9) Activities include bread-baking workshops where participants learn about different cultures through baking; a bread/exchange to allow community members to share stories and food; a writing activity that invites young writers and creative writers to share poetry and prose investigating the theme of neighbors; a block party so that the four families receiving homes through Habitat’s Home Builders Blitz 2006 can meet their new neighbors; and a community concert titled ‘Songs of Our Neighbors,’ which will feature the Whirlwind Interfaith Choir.

Only recently has the Whirlwind Project board started to keep track of the number of community members who attend its programs and events. Fromm knows that the block party had 224 people, while the opening concert of the 2006 season had 300 people. The Project’s last poetry reading had a mere 25 people, yet the local TV station covered the reading. (11) Sometimes there are 4 people baking bread in a private kitchen or 20 people congregating at the mosque baking challah, a popular bread in the Jewish faith.

In general, the Project hopes to include more representation from the Buddhist and Hindu communities, but trust takes time. It took 4 to 5 years for the majority of the members of the mosque to feel comfortable with the Project and to actively participate in its events.
The Whirlwind Project has always wished for youth participation, and tries to involve children when concerts are planned. For example, the youth at the mosque put on a drama from the book of Job one year. Around the time the United States was invading Iraq, junior high students from the Sinai temple, the mosque, and the Baptist church led the audience in a Hebrew and Arabic song about peace: Od yavo shalom aleinu [Salaam]. Following the sing-along, some people told Fromm, “After you’ve experienced something like this, how could anybody want to declare war on anybody?” (12)

Fromm describes the biggest challenge for the Project simply as time. The volunteer members of the board have duties to other organizations and fulfill other leadership positions, so it is difficult to find time to work on the Project. This also leaves little time to publicize the great public events that the Project offers. Additionally, there is no formalized payroll or staff. However, with the 2006 Art of Being Neighbors theme, the Whirlwind Project has been able to draw in more volunteers and generate more publicity than before. (13)

Another challenge to the Project is its struggle to steer clear of politicizing. In order for the greatest amount of community members to feel welcomed by the Project, the board does not want a political agenda to replace its mission for mutual respect and understanding. This issue came into play in 2003, when war was declared on Iraq. Originally, the board members had planned no religious services, but when the war seemed to be inevitable, they decided to find a way to have a service for peace, without taking a political stance for or against the war. (14) Again in 2006, the board wrestled with a decision to respond to an offensive editorial in a local paper. A response was submitted only with a unanimous approval by all members of the board. (15)

Hopes for the Future

The Whirlwind Project hopes to carry on its broad based community effort, and would like more people to be informed about the Project and use it as a model for other interfaith initiatives.
Also, the need to continue to build trust in the community and learn more about the customs and traditions of other religions and cultures remains imperative: “The goal [of the Whirlwind Project] is for members of a local community to relate to each other on a human level and to develop greater appreciation for each other’s traditions.” (16) Nevertheless, Fromm expects that the Project is working, and finds personal meaning through its endeavors.

For Fromm, what is most meaningful is the way in which people of different religions and cultures have been able to share openly in others’ sacred spaces. For example, she may have never stepped foot in the Central Illinois Mosque had it not been for the Whirlwind Project, but now she feels comfortable and welcomed there. (17) As the Project moves forward to its 5th year in existence, its mission remains the same. Putting it so eloquently, Fromm believes that, “You don’t have to be in a hundred percent political alignment or share the same belief system to sit next to someone and have a similar human experience with a piece of music.” With this goal in mind, the Whirlwind Project is able to affect positive change in the community.