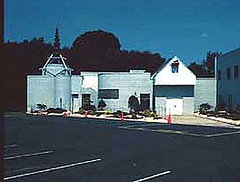 The board of the temple was incorporated in 1979. The property was purchased in 1979, and construction started in 1982. The temple opened in 1984. Until that time, the community worshipped in members’ houses. There is a guru who inspired the movement, Anantshrivibhushit Swami Shri Gangeshwaranandji Maharaj Udaseen. The central murthi of the shrine is Veda Narayan, a form of Vishnu holding one Veda (collection of scripture) in each of his four hands. There are only three such murthis in the world, one in Ahmedabad, one in Bombay, and the one here in East Brunswick.

The temple provides a 16-page devotional booklet for use by devotees. The books contain prayers and hymns to Ganesh, Shiva, Vishnu, Krishna, various mantras, short occasional prayers, and a brief description of meditation. It was compiled by Dr. Ramesh Gupta of the Indian Civic Society, affiliated with the Bharat Vikas Parishad, International, 714 Dominion Drive, Moorestown, NJ, 08057. The Indian Civic Society is a cultural organization started in 1995 that brings Indians of various backgrounds together to learn about Indian culture. The people who started the ICS were concerned that most of the invited celebrities representing contemporary Indian culture who came to the US on tours were either religious figures or entertainment celebrities. They started the organization in order to insure that contemporary writers of literature and poetry in the Hindi language had the opportunity to visit the US and enrich the standard cultural fare. The Bharat Vikas Parishad, or the “Indian Development Organization,” approached the ICS and asked if it wanted to affiliate and become a sister organization. Dr. Ramesh Gupta benefited from this affiliation when he received financial and logistical assistance in publishing his devotional booklet in India.