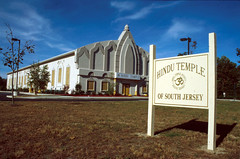 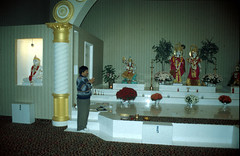 The Hindu Temple Society of South Jersey first met and organized in June of 1996. In that same year, the board started negotiations to buy property in the area just outside Atlantic City, NJ. In November, 1996, the board approved the purchase of an 11,850 sq. ft. warehouse on 7.5 acres of land, for $500,000. The engineer, contractors, and architect were hired in 1997, the same year that the board was incorporated. Then began a two-phase building project. Site work and renovation started in 1999, converting the warehouse into a temple and meeting hall, including an industrial kitchen, eating hall, and priests’ quarters. The second phase of the project will be the construction of a traditional structure, the “Palace of God” temple, on the premises adjacent to the current building. This phase is set to begin in 2002, and will cost between $3 and $5 million dollars. The current murthis of the temple are Radha/Krishna in the center, with Shiva, Hanuman, Ganesha, Mahavir, and Ambamata (a form of Parvati). They were purchased from Jaipur, India, in 2000. The official consecration of the temple will took place in December of 2001.

The temple already sponsors several educational opportunities, including language classes, Balvikas (child development classes), religion, dance, music, and yoga classes. The daily schedule for the temple is 8:00 A.M. to Noon and 4:00 P.M. to 8:00 P.M, with daily artis at 5:00 A.M. and 7:00 P.M. Special bhajan singing takes place on the eleventh day of each half-month.