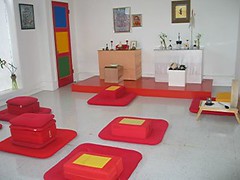 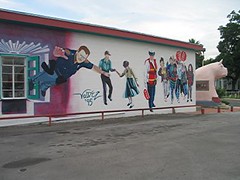 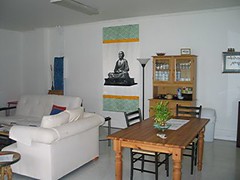 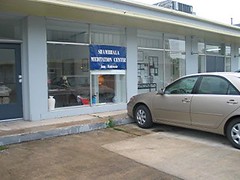 The San Antonio Shambhala Center holds a unique place in both Buddhist tradition and San Antonio culture. Since its founding in a private San Antonio home in 1984, the Center’s directors have always been women. The Shambala Center has always strived to bridge the vast cultural and economic divides of San Antonio and make Buddhism accessible to Spanish speakers, and residents regardless of socio-economic status.

Founder Elisa Gonzalez was drawn to Buddhism in her youth when she continually asked herself: Why is there so much suffering in the world? This question remained with her during her studies at the University of the Americas in Mexico City. When she returned to America and moved to Seattle, she was drawn to study theosophy and later Buddhism. While Buddhism appealed to her, she struggled with what she viewed as the secondary role of women within Buddhist tradition.

In 1984, Elisa moved to San Antonio, already deeply involved in Shambhala Buddhism and eager to open a local center. The first small group, including a four-year old and a dog, met for meditation in her house, later moving to a massage parlor, then a cottage they named “Baby Dharma Dhatun.” Eventually, the growing group split in half, with one group forming Corazon de la Sangha, a meditation group dedicated to the teachings of the Vietnamese Buddhist teacher Thich Nhat Hahn. Elisa, along with Allan and Doria Cross, founded the San Antonio Shambhala Center and moved to their first official building, an indigo painted beauty parlor located in a railroad box car and tucked away on a street with no name.

In 1992, the San Antonio Shambhala Center became the first center in the world to receive recognition from the newly installed Sakyong. In her term as director, Elisa taught meditation in both English and Spanish, making Buddhism accessible to the city’s Hispanic community. The San Antonio Shambala Center relocated to a larger space on Evers Road and then in 2000 to building on South St. Mary’s Street (next to the Pig Stand, America’s oldest drive-in restaurant). From 1992-1998, Doria Cross, who had been among the first group of practitioners in the mid-eighties, took over as the Center’s director. In 2003, that position was filled by Betsy Pond who had her first experience of Buddhist meditation at the Center’s boxcar location. Today, the Shambala Center is in the process of acquiring a new location. All directors and staff are volunteers.

The San Antonio Shambhala Center holds meditation practices on Tuesday and Thursday from 7-8pm, and Sundays from 9:30am to 12:30pm. On Thursday evenings, they hold Dharma discussion group at 7pm. They also offer a calling service for practitioners who seek advice on improving meditation at home.

The Center is located in the heart of the South Side, in a historically Hispanic and Spanish-speaking neighborhood. The building is just opposite a giant pig statue and a mural of local schoolchildren and a flying policeman. Surrounded by brightly colored houses and busy streets, the Center assumes an air of mindfulness in the midst of chaos. The Center itself consists of a spacious welcoming hall with a small library, and two large meditation halls. One hall contains two separate altars: one for practitioners whose focus is solely on meditation, and another for practitioners following the Buddhist path. The meditation halls are open and full of light, with enough meditation cushions to accommodate dozens of visitors. According to Betsy Pond, the Center decided to move to the South Side deliberately because they felt as though they were “hiding” in their rural location and unavailable for the vast majority of San Antonio residents.

Most of the practitioners are local college students. However, the San Antonio Shambhala Center, since its founding, has prided itself on the diversity of those who practice there. “I feel that this culture of diversity, with a variety of Hispanics and other Americans, has really enriched the center,” said former director Betsy Pond. “We have people from all socio-economic backgrounds, the unemployed, doctors, and everyone in between. Our constant challenge is to make the Buddhist teachings accessible to everyone.” The San Antonio Shambhala Center plays a different role than many of the other Buddhist Centers in San Antonio, which generally attract individuals from particular ethnic communities. While San Antonio boasts a diversity of Buddhist centers, including Thai, Korean, and Japanese, the San Antonio Shambhala Center caters to Buddhists and non-Buddhists seeking to practice in English and/or Spanish.