The Islamic Center of Vicksburg 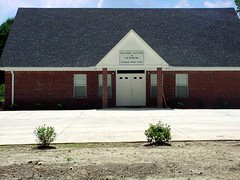 The Islamic Center of Vicksburg (2003)

The Community of Islam in Vicksburg, Mississippi is the only masjid within fifty miles of the city, drawing Muslims from throughout the southwest Delta region of the state. The Muslim community of Vicksburg dates back to the early 1970s. The imam of the Community of Islam was a student under Elijah Muhammad for three years and worked within the Nation of Islam until 1973. When he moved from Chicago to Mississippi, he decided, along with the community as a whole, to affiliate with W. Deen Muhammad’s American Muslim Mission and establish a masjid in line with this organization.

Since the late 1970s, the population of Muslims in Vicksburg and the surrounding area has been growing steadily in conjunction with the growth of the city of Vicksburg from a sleepy Civil War tourist town to a major economic hub of the Delta. The Community of Islam as it stands today was founded in 1993. Historically the masjid has been predominantly African American. Today Community of Islam includes Muslims of widely diverse backgrounds.

The current masjid is a temporary facility, a small house located near downtown Vicksburg that has been converted into a mosque. The community has recently embarked on an ambitious building project in the suburbs. The new facility will include a large space for worship, a gymnasium, a dining area, and classrooms for Arabic language instruction and studies of the Qur’an and hadith.

The Community of Islam gathers every Friday at 1:00 for jum’ah prayer and sermon. Prayer is offered in the evenings most nights of the week. There are additional worship times for women and children on Sundays. Community of Islam celebrates all the major Muslim holidays and festivals. When the new masjid is fully constructed, the schedule will include Arabic language instruction as well as Qur’an and hadith studies.