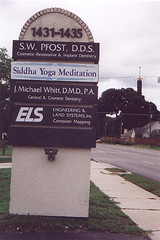 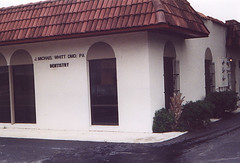 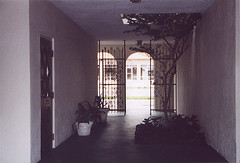 Siddha Yoga Meditation Center of Orlando (2006)
As of 2006, the Center has moved to a new location in Fern Park, Florida.

Siddha Yoga meditation is the spiritual path rooted in the timeless teachings of the Siddhas, the spiritual masters of India and is headed by Swami Gurumayi Chidvilasananda whom Swami Muktananda chose in 1982 as his successor. Siddha Yoga has been described as a combination of Kashmir Saivism and the “yoga-oriented guru-disciple movements of Hindu-based spirituality.” Gurudev Siddha Peeth in Ganeshpuri, India, is the mother ashram where Bhagwan Nityananda, Baba Muktananda’s Guru has asked him to settle and where Gurumayi was installed as the present Guru of the lineage. Gurumayi also resides in Shri Muktananda Ashram in South Fallsburg, New York State but continues to travel and to bring the teachings of Siddha Yoga to seekers around the world.

Swami (Baba) Muktananda brought the path of Siddha Yoga meditation to the West and created the first Intensive in 1974 in Aspen, Colorado. In 1989, Gurumayi offered the first global satellite Intensive. An Intensive is the cornerstone program in Siddha Yoga. This is usually a 2-day program of meditation, chanting, and teachings of the Guru. According to the teachings of Siddha Yoga, during Intensives devotees receive shaktipat, the awakening of their spiritual energy through the grace of the Siddha master. Since 1989, satellite broadcast Intensives have been offered to thousands of seekers in over a hundred centers worldwide.

History of Siddha Yoga in Orlando

In 1981 a Siddha Yoga devotee family by the name of Shrigar moved to Orlando and settled here. They had made contact in the following year with a couple of women devotees who had moved into the area as well. The Shrigar family invited the two women to their home for weekly chanting, and gradually over the next couple of years a few more followers of Siddha Yoga appeared in town and through word of mouth were invited to join the Shrigars for their weekly Satsang.

During 1984 several young adults joined the group and a decision was made by several people in the group to rent a house together. The house became a live-in Siddha Yoga center. There was a large hall at the house, and regular gurugita chants as well as satsangs and other programs were held. The organization of the group remained pretty informal, though, and a year later the house folded and the devotees began meeting at one of the women’s homes in town. Despite the great influx of people who attended the weekly Satsang, the pattern of this group’s operation for most of the 1980s remained informal meetings at people’s homes.
In 1992 the group of regular practitioners came to a crossroad. They realized that they were growing in numbers and were too large to continue their weekly satsang programs in people’s homes, and began considering the by-laws and requirements of the Shri Muktananda Ashram in New York for becoming a Center. The group went back and forth and after some time deliberated that they were now ready to rent a public hall and become a formal part of the Siddha Yoga Foundation. That is how the group has operated since.

Numerous programs are held at the Center in addition to the weekly satsang and gurugita chanting program. These include Hatha Yoga instruction, study groups and contemplation of the teachings of Siddha Yoga, video and audio Intensives. The Intensive is the cornerstone program of the Siddha Yoga path. These are usually 2 daylong programs, filled with teachings and meditation. They are held on auspicious occasions such as the dates of births or deaths of a Siddha, in celebration of the New Year, etc., and are usually led by Gurumayi. At times, the swamis lead the program as well. One of the largest intensive programs at the Center was held last June. This was a chanting intensive with 45 participants for the daylong program. There are also some children’s events and programs. The weekly satsang programs are open to the public and are free of charge, but the intensive and video courses do carry a fee. A calendar of events is published three times a year as well as a variety of brochures and other mailings announcing and describing special events.

Location and Physical Space of the Center

Over the past seven years the group has held several different locations. The first was a rented space near Winter Park City Hall, where programming was held every Sunday afternoon. The challenge of that rental arrangement was that everything had to be set up before the program and removed as soon as the program was over. After about a year, the group decided to rent a full-time space and found a location in Maitland where they were for another two years. That location had about 600 square feet. That small space at this location accommodated a special program when a group of priests who came into town for a weeklong vacation. During those few days the group had the largest program they have ever had when 38 people joined and participated in the ceremonies that were held there.

The group continued to grow and outgrew its space but remained there for another year until a new space in Winter Park was found. This is the present location of the group, where it is anticipated that the group will remain for at least another year. This location in Winter Park has about 1000 square feet and they have an average of 35 people for their weekly satsangs and for many of their programs. The building has a main hall where the Puja is located and where all programs are held. Just prior to entering the main hall there is an anteroom called the lakshmi room where preparation for aarti are made. There is a kitchen, a common area, a bookstore which contains many Siddha Yoga publications, videos, CDs, and photos of the Siddha Yoga gurus.
A recent proposal called Operation 2000 is a plan to move once again to a space that would be twice as large as their present location affords As the Center continues to grow and attract newcomers to its programs, this additional space will be greatly welcomed. A good sign of the center’s growth and promise is that in the past year the center has sponsored all satellite broadcast programs.

It is evident from the programs provided by the Center that they are very well organized with great resources and guidance from the New York ashram. All the programs tend to have a good balance of spiritual teachings, chanting, contemplation and meditation. The Center boasts several sessions of Hatha Yoga instruction, taught by a teacher who is certified by the Siddha Yoga Foundation. The Gurugita Video Course was a recent program held over two months. Retreats and other contemplating experiences are also offered periodically. Members of the Center have periodically promoted introductory courses of the Siddha Yoga path in the community. On one occasion members visited a class at Rollins College and demonstrated the Siddha Yoga chanting practice to the students.

The Orlando Center is one of many Siddha Yoga centers that exist worldwide and are affiliated with the Siddha Yoga Foundation (SYDA) and the mother ashrams. Consequently, about all the programs held at the Center conform to those that are designed by the program committee at the New York ashram. This characteristic of uniformity enables the devotee of this path to feel comfortable and “at home” visiting at any Siddha Yoga center.

When one enters the hall one encounters the sacred space of the Center. It is extremely clean, it is quiet, the music is soothing, and most people report feeling very natural and comfortable there. In Gurumayi’s words, the Center ought to be “simple and elegant.” Indeed it is. Jesse Hanson notes that the center reflects the spirit and the environment of the mother ashram, Gurudev Siddha Peeth in Ganeshpuri, India and the Shri Muktananda Ashram in New York.

In observing the Center, not only is the physical space soothing and spiritually uplifting, but also the members of the Center exude a great deal of energy and warmth. Their commitment to the Siddha Yoga path is quite evident in every step that they take while at the Center. There is a great sense of inclusivity that newcomers encounter.
In talking with some of the members of the Center, the common attitude expressed toward the Siddha Yoga path is that this is not a religion. Even though there are many overlaps and resonances with a variety of Hinduisms, devotees are most comfortable calling their path a spiritual path with their full devotion to Gurumayi, the living master of this lineage.
More information about Siddha Yoga can be obtained by visiting the website at www.siddhayoga.org.