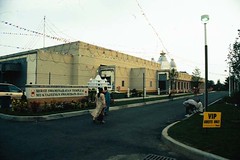 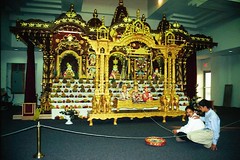 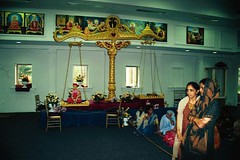 From 6:00 A.M. to Noon, and 4:00 P.M. to 9:30 P.M. Programs will be offered in Gujarati, with materials translated into English, Hindi, and Sanskrit. Activities will include Pujas, and cultural and educational activities, including Sunday School classes for children, language classes, preventive maintenance classes for the elderly, and exercise, aerobic and meditation classes for all age groups.

In 1970, Swami Muktajeevan (spiritual head of the Swaminarayan Gadi Sansthan) came to the U.S. (the first such leader of any of the three Swaminarayan groups to do so) and called on the group of NJ devotees to build a temple in NJ. By 1987, a group of 30-40 families planned for the incorporation of a board of trustees. This board was incorporated in May, 1988. Swami Muktajeevan visited NJ in 1990 and asked them to build a temple. Over the course of seven years, the board raised money and investigated 17 different locations for the temple, including land, churches, or other buildings for sale. In 1997, the board moved to try to find empty land to build a community hall and temple “from scratch,” and not convert an existing building. In March of 1997, the land was purchased, and in May 1998, zoning and variance were approved. They broke ground August 29, 1998. As of August 5, 2001, the entire structure is nearly completed; the sacred images were installed in the temple on this date, and worship will now happen regularly in the temple. The multi-purpose room and other rooms are not completely finished yet. Cost of the temple will reach about $7 million dollars. It is the first temple of any of the three Swaminarayan groups in the US to be newly built from the ground up.

On Sunday, August 5th, 2001, the murthi (image) installation day, a “Suvarna Tula” was held, in which each of three solid marble images was placed on a giant ceremonial scale (tula), and solid gold bars were placed on the scale. It was estimated that each murthi needed 750 kilograms of gold to balance the scale. The money represented in the gold bars (which were borrowed from a nearby bank for this ceremony) represents the donation to the temple that devotees from around the US, Canada, England, India, and Africa who came for the occasion have offered. The last time such a “tula” was performed was on the 50th birthday of the previous spiritual leader, Gurudev Jeevanpran Shree Muktajeevan Swamibapa, in 1957 in India. At this ceremony, Shree Muktajeevan was himself weighed against gold, and the money raised was donated to charity. Similarly, on his 60th birthday, he was weighed against platinum, and on his 70th, against precious stones. In each case, the money raised was donated to charity.