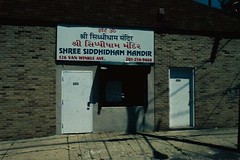 Shree Sidhi Dham Mandir has no official affiliation. However the current priest and manager, Upendra, briefly served as a priest at the neighboring Govinda Temple on Newark Avenue, for nine months. Upendra’s two brothers are also priests. One, Arovinda Mehta, is the full-time priest of the Shree Sidhi Dham Mandir, and the other, Pravin Mehta, is priest of the Sanatan Temple in Parsipanny.

Upendra Mehta came to the U.S. in 1986. His father is Vedanta Acharya at the Unjha Temple in Northern Gujarat. In the early 1990s Upendra served as a priest at the Govinda Temple for nine months. With support he initiated a move to set up the Shree Sidhi Dham Mandir temple.

In February of 1996, he bought an old automobile service garage. After two years of renovation, the project was complete and opened in June 1998.

The images of the temple come from Jaipur, India, all cut from single marble stones. The Shiva Lingam is from the Narmada River in Gujarat. At the image consecration ceremony (June, 1998), an estimated 2100 people were in attendance. The three-day event was officiated by three priests from the U.S. and two from India.