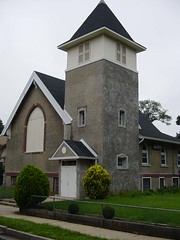 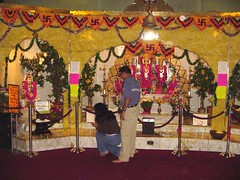 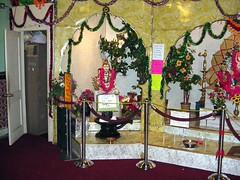 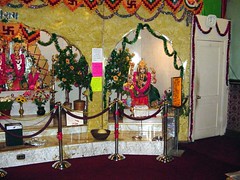 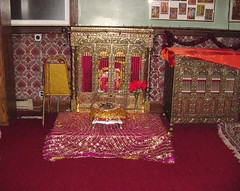 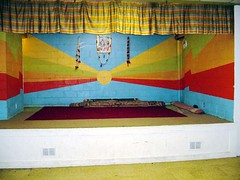 One of the first Hindu temples in New Jersey, the Shree Ram Mandir was started by Mr. Bhaskar C. Patel in 1978. Mr. Patel had been working as an engineer in the US since 1967. Together with his wife, Indu Patel, Mr. Patel started holding prayer services to the Hindu god Ram in their home. In 1978, the Patels organized a fundraising effort, and together with their small worship community, they bought an old church and accompanying house that had not been used for ten years. That same year, they ordered the images for worship from Jaipur, India. Bhaskar died in 2000 and Indu carries on as the prayer leader, together with the help of her children and grandchildren.

Services are Monday through Friday, 6:00 p.m. to 7:30 p.m., with arthi at 7:00 p.m., and Saturday and Sunday, 10:00 a.m. to 7:30 p.m., with arthi at 6:00 p.m. and 7:00 p.m. A normal evening service consists of people gathering for bhajans, devotional songs, at 6 p.m. The group then participates in arthi, or the reverencing of the deities with oil lamps, with women from the group being invited to handle the lamps. Mrs. Patel sits in a chair to the side of the room and leads the singing and arthi. After the arthi, the group sits and prays silently, after which the prasad (food offering) is shared among the group. Prasad usually consists of a small plate of pieces of cut fruit that have been brought by devotees as an offering to God.

Average attendance is 50 to 75 people per weekend night. The worship space is open, carpeted, and surrounded by paintings of the deities on the walls. At the front of the room, behind a rope-barrier, the images are arranged in the north-Indian style. The main image of the god Ram, with his consort Sita on his left, and his brother Laksman on his right, occupies the center. To their right is Hanuman, and to their left, Ganesh. At their extreme right is the god Shiva, and in front of him, a linga. On their extreme left is the goddess Durga. In an exquisitely ornamented box on the right side of the room is an image of Bala Ramji, the child-form of Ram.