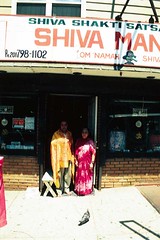 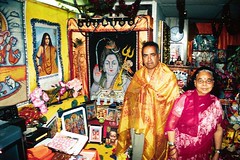 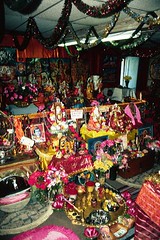 The Shiva Mandir is really a community shrine. It has no specific worshiping community; it is open to anyone. There is no mailing list or organization that manages the shrine. The shrine is the personal property of Rabindranath and Liliya Singh, and is supported by Rabindranath, who has income from a store two doors down the street, and other property he owns. Rabindranath is also a Notary Public. The building used to be a phone store, and also a bar.

The Shiva Mandir opens around 10:00 A.M. and closes around 9:00 or 10:00 P.M. every day. There is arti, twice daily, about 10:00 A.M. and 7:00 P.M.. They hold a regular Sunday service at 10:00 A.M., in which there is chanting, bhajan singing, puja (prayer), a Vedic Havan (fire), the Gurupurnam puja (celebrating the Hindu trinity of gods as guru), the universal peace prayer, then final arti and prasad. The worship book, called “Hindutvam,” was published by Pranavanandaji, the founder of the Bharat Seva Ashram, and contains excerpts of Vedic prayers and an order for worship.

The shrine, a satsang gathering place, had been a dream of the proprietor for many years. On April 11, 1993, Singh and his wife were badly injured in a car accident. Thankful for their recovery, they decided to dedicate the store-front space in this property to the creation of a satsang gathering place. They planned for it, collected murthis from the Govinda temple across the street (the Govinda temple, having lost its building for lack of funds in the early nineties, could not finish paying for the murthis. Rabindranath took over payments and put the murthis in his shrine). They officially opened the shrine on March 4, 1997, Rabindranath’s 50th birthday.