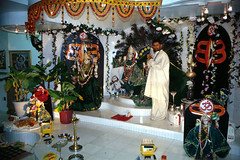 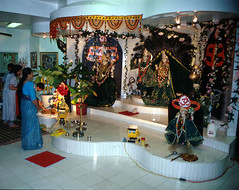 In the mid 1980s, a group of people in the Parsippany area started the Indian Community Center, which organized a Sunday School program in Little Falls, NJ, for local Hindus. The group was affiliated with and attended the Hindu Cultural Society of the Hindu Temple of Garfield, one of the first Hindu temples in NJ. The present priest was originally a priest at the Hindu Temple in Garfield. In the late 1980s, the Indian Community Center started looking for property to buy in Parsippany. They found and purchased a small Episcopal Church in a suburban neighborhood in 1989. Two months later, a fire damaged the building, and they undertook a major renovation of the structure. They completed this process in 1992 and officially opened the temple for worship with a major image and temple consecration. The images in the temple are Ganesha, Shiva, the Goddess Shakti, Radha/Krishna, and Hanuman, and were made in Jaipur, India.