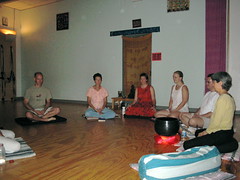 The Plum Blossom Sangha meets every Sunday from 6-8 p.m. for a traditional session of sitting and walking meditation, followed by informal tea and dharma discussion. There is also a sutra study group the fourth Sunday of the month from 4:00-5:30 p.m. Other monthly activities include chanting practice the third Sunday from 4:30-5:30 p.m., recitation of the Fourteen Mindfulness Trainings the second Sunday from 4:30-5:30 p.m., and recitation of the Five Mindfulness Trainings the first Sunday at 7:00 p.m.

The Plum Blossom Sangha was first founded in 1994 after several friends spent a month on retreat in Plum Village, France at Thich Nhat Hanh’s monastery. The group met in a private home for nearly five years and now uses the rear studio of the Austin Yoga Studio, which has allowed for substantial growth in its membership and practice. As the group’s size has increased, leadership has remained collective with ordained members serving as facilitators rather than superiors. The Plum Blossom Sangha continues to use traditional Buddhist practice to achieve mindfulness in their everyday lives.

The Plum Blossom Sangha is predominantly Caucasian with a growing number of Asian and Latino members. Services and chanting are conducted in English.

The Plum Blossom Sangha uses a large yoga studio, which can be easily outfitted for their needs. To prepare for the monthly sitting session, a small altar is placed in the room where flowers and incense may be offered. A traditional assembly bell is brought out as well as a smaller signal bell for conducting the sitting session. The lights are kept dim. The room is large enough for the Sangha to switch from sitting to walking meditation with no difficulty.

In addition to their regular practice, the Plum Blossom Sangha hosts a number of ceremonies and special events throughout the year. The group holds traditional ceremonies for the dead as well as a Mother’s Day ceremony. A “Day of Mindfulness” is held four to six times a year. The Plum Blossom Sangha also hosts and facilitates talks by visiting Dharma Teachers and offers an annual retreat with Brother Chan Huy, a lay dharma teacher ordained by Thich Nhat Hanh. Br. Chan Huy, who lives in Canada, provides spiritual guidance to the sangha. The group also collaborates with the local chapter of the Buddhist Peace Fellowship in offering public outdoor walking meditations for peace. The most recent one occurred on February 28th, 2003. Although the walk was in response to the growing threat of war, this traditional walking meditation was done in tranquil silence and without bearing signs. In addition to their regular group, the Plum Blossom Sangha has a Dharma Book Club that meets the second Monday of the month in a private home, and has recently started a small children’s program that meets Sundays from 6:00-7:00 p.m.